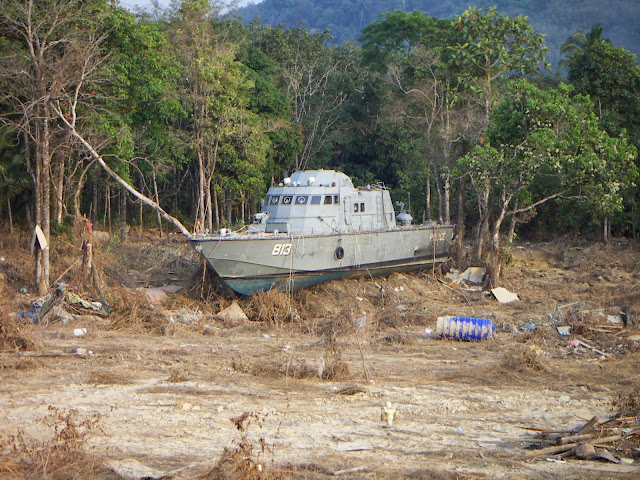 A few weeks ago I was traveling in South Thailand and thought about what now exactly 10 years ago at 26 December 2004 did happen in all Southeast Asia and also along the west-coast of Thailand. No I was not personally effected.

We were having a wedding party in Khon Kaen with a big groups of friends. The couple who were tying the knots would fly the next day to Phuket together with their family from Europe for a honeymoon holiday at the beach. Luckily they did not marry 2 days earlier. While in the lobby of the hotel we heard the news about a tidal wave in Phuket but did not realize yet what really happened. Our host and family still had the plan to go to Phuket and enjoy their honeymoon. That was until we did watched the news on TV .....

In my life I could not imagine (and can actually still not) that a wave could wipe out islands, countries and more as 250.000 people. Think about the number for a moment. Think about the people who came with their family, beloved one's, future wife or husband ... and who had to go back alone. That is 10 hours sitting next to a empty chair. Think about people who lost their all family, house and everything they had.

The next few days and weeks that is what sunk into me. In the months to follow we would learn more and more about the disaster that hit so many countries and people. We did learn also about amazing stories of peoples holiday changed into a search & rescue mission and taking care of the wounded and death people. Untrained, unprepared. We did learn about the decisions people had to make to safe their own life and what some people did to safe others peoples life.  A memory many people will have to carry the rest of their life. We did also learn about the many people who interrupted their comfortable life elsewhere in the world and came to the disaster zone to help without judgement.

In the years to follow we would learn (in Thailand and other countries) that not all the resource given to help rebuilding peoples life & houses was really used for it. We would also learn that there are people who had used this disaster for their own gain. May their life & souls get what they deserve.