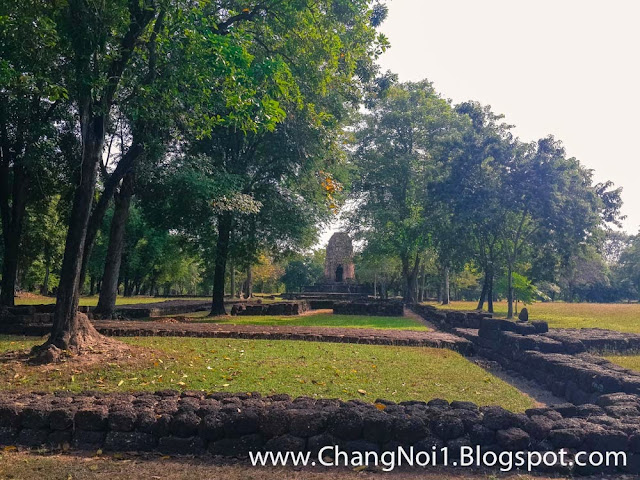 In 2014 we visited Si Thep Historical Park located in Phetchabun province, about 7 km east of Route 21 between Saraburi and Phetchabun.  Si Thep Historical Park contains the ruins of the ancient town Si Thep, originally called Aphai Sali and was the center of the Khmer culture during the reign of the Khmer Empire and the Dvaravati culture. Si Thep Historical center dates back from 6th to 10th century and consists of 2 parts, the Inner Town and the Outer Town. Both are surrounded by a moat and both were surrounded by a city walls. But most of the walls & gate's are gone due to looting. I assume that some old temples and houses nearby are build with stones from the ancient city. Most of the artifacts found here are displayed at the National Museum in Bangkok. So I assume that the beautiful statues at the new Information Center are copies. The main attraction points of the park are Khao Klang Nai (with remains of beautiful decorated stucco motives in Dvaravati Buddhism style), Prang Si Thep (build during the Angor period), Prang Song Phi Nong, Khao Klang Nok (located 2 km north of the park), Prang Ruesi (also located about 2 km north of the park). West of the modern town of Si Thep can be found the Tamorat Cave (on top of a mountain) with Mahayana Buddhist stone carvings. The Greater Khmer Empire did spread all over what we now call Thailand, South Laos, Cambodia and South Vietnam. Most of the ancient Khmer temples in Thailand can be found in the lower part of the Isaan and I am trying to visit them all.