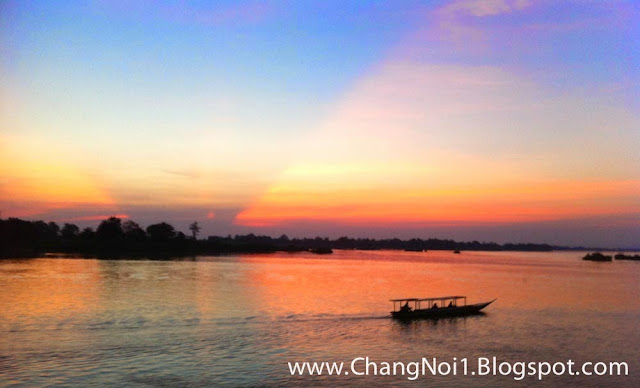 The Mekong River plays an important role in South East Asia for agriculture, transport and tourism. And while living in Thailand and traveling in SEA the Mekong River has drawn my attention and whenever I am nearby this mighty river I have to stop somewhere, somehow and overlook the river. There is something that attracts me to this river. So join me in a few stories about this river. It will be short stories, just to encourage you to find out more about this great river. This is the first story in the sequel of the "The Mighty Mekong River". Following will be 3 more parts about history, traveling and future. But let's start with a overview of the river that starts high at the Tibetan Plateau in China and ends at the Mekong Delta in Vietnam. The current flow of the Mekong River was developed in the past 6.000 years.

The Mekong River is considered to be the 7th longest river of Asia with 4.350 km (or 4.900 km depending on what source you

With so many countries & cultures involved you can imagine the river has many names like "Turbulent River" (China), "Mae Nam Khong" (Thailand & Laos), "Tongle Mekong" / "Tongle Thum" (Cambodia), "Wylie" (Tibetan), "Song Lon" or "Song Mekong" (Vietnam) and in Southern Vietnam it is also called "Nine Dragon River". There are also products that try to make a connection with the river like "Blue Mekong" (a Thai rum/whiskey), "Mekong Peanuts" (from Cambodia) and "Mekong Life" (a restaurant in Vietnam). My favorite name to use is "Mae Nam Khong" what is roughly translated as "The Mother of Water" but more strictly as "River Khong". "Mae" means mother and "Nam" means water.

The river acts as water-shed in the region and in that way plays an important role in the water management of the region. The river also holds a huge fish diversity and even some unique species like the Irrawaddy Dolphin, the freshwater stingray and the Mekong Giant Catfish. Although you would think the Mekong River would be a great transport route for the region unfortunately many parts have huge rapids like in Southern Laos that makes the river not usable as gate-way to/from the sea. The fact that a huge river like this cuts thru many countries it also divided economic regions before the time of ferries and bridges. And the latter is something that is changing rapidly at the moment. If you like to travel along the Mekong River in Laos or Cambodia,  NOW is the time to go as rapid economic development will change this country very fast. And travel-wise not for the better.