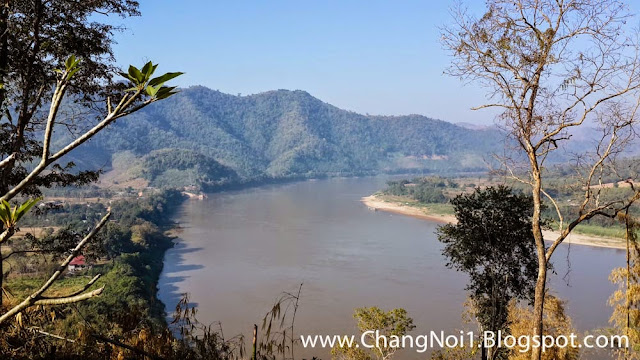 With so many countries and cultures that the river is passing it has become a inspirational source for travelers from all over the world to explorer. My part of traveling on or along the river goes as far as I have been myself.


Traveling on the Mekong River between Burma and Laos

In 2004 I traveled on the Mekong River between Burma and Laos from Xiang Kok (Laos) to Huay Xai (Laos). And after a last lunch in Laos we took the ferry to Chiang Khong (Thailand). I made this trip on a 4-persons speed-boat! That means about 4 hours uncomfortable sitting in a boat with a hell of a noise from the huge engine. Not to mention "flying" along rapids & big rocks in the river. Not a save way of transport and although it was a spectacular experience I would never do it again. With this boat trip you also are passing the "Golden Triangle".

A few year later I traveled first from Mae Sai along the "Mae Nam Ruak" (here the Thai-Burmese border) to the center of the "Golden Triangle" where the "Mae Nam Ruak" mouths in the "Mae Nam Khong". It is here where you find the famous "Opium museum" and in this district of Chiang Saen you will also find a kind of harbor for cargo boats to/from China. I traveled along the river until Wiang Kaen where the Mekong River enters Laos for the first time and goes all the way to Luang Prabang (Laos). This a route some travelers take to travel on the Mekong River by speedboat or slow cargo-boat between Thailand and Luang Prabang.

At Nong Khai and Mukdahan were originally only ferry crossings to Laos, and thus the creation of the famous IndoChina Market. Nowadays there are bridges crossing the Mekong River and the ferry crossings are only used for Thai and Lao people (just like in Chiang Khan). But the famous IndoChina Markets are still there in Nong Khai and Mukdahan. At Nakhon Phanom is a third bridge crossing the Mekong River, as gate-way to Vietnam. And at Bung Khan is a ferry crossing for trucks and cars. All bridges and the one ferry at Bung Khan are international border crossings. There are actually at least at 6 other ferry crossings for locals (Thai & Lao).

In 2012 I made a motorbike trip along the Mekong River in South Laos and Cambodia. Highlight of that trip was 3 days at the "4000 islands" in the Mekong River, bordering Cambodia. Here there are a few big islands in the river where people are living and many villages are. Like Don Khong. And there are "thousands" of smaller "islands" (or just big rocks) in the river that create huge stunning rapids in the river. It is here also that the French did build the first (and last) rail-road in Laos. It is also this area that makes traveling or transport over the all river impossible. It is also in this area that you can see the world famous Irrawaddy Dolphin. Well you have a chance of seeing if you are lucky.

With traveling 160km+150km+800km+500km means I did only 1.610km of the 4.350 km. So on the bucket list are
If you like to travel along the Mekong River in Laos or Cambodia,  NOW is the time to go as rapid economic development will change this country very fast. And travel-wise not for the better.