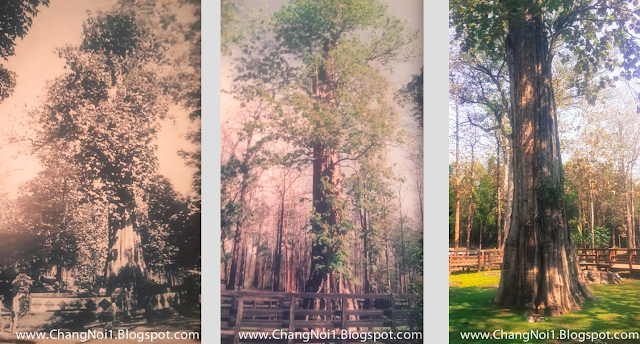 The Giant Teak Tree is world's largest teak tree living today. That "largest" is measured at the perimeter and at 1.30 meter above ground the tree has a perimeter of 9.85 meter (measured on 13 October 1982) and a height of 47 meter. It has estimated longevity at least 1,500 years old. Surrounding the Giant Teak tree, there are medium sized teaks, teak seedlings in the teak-dominated mixed deciduous." The numbers do not really add up when you see the tree in reality. But never mind it is a very nice park (free entrance). In 1977 the height of the tree has been reduced to 37 meter due  to a storm. Photo above is The tree in 1985 (left), in 2005 (middle) and in 2015 (right).
LABELS : Nam Pat Thailand Thailand-National-Parks Traveling Uttaradit province
LOCATION : Saen To, Nam Pat District, Uttaradit, Thailand