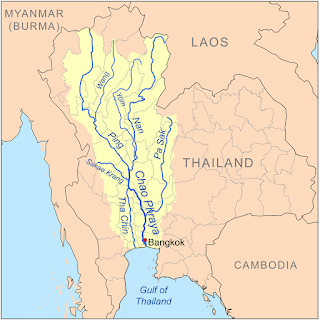 The famous Chao Phraya River starts where the Ping River and Nan River meet in Nakhon Sawan. Then it flows a bit more south and is contributed by the Pa Sak River and Lopburi River creating a kind of island of Ayutthaya (the second ancient capital city of Thailand). At Chai Nat the river splits and in that way actually mouths in the Gulf of Bangkok as 2 rivers ... the Chao Phraya and the Tha Chin River. These 2 rivers created a river Delta on what Bangkok city is build full with klongs (canals) and for that reason in the old days was called "The Venice of Asia". The Chao Phraya is also home to the harbor of Bangkok, what did put Bangkok on the map as cross-road of South East Asia. You can make great dinner cruises on the Chao Phraya or take a boat from Bangkok to Ayutthaya. Also at Ayutthaya you can make a wonderful boat trip around the old city.

Although some rivers are called "lesser rivers" as contributory to the Chao Phraya River, some of them have actually an important role for the historical importance of some cities. Like the Ping River that flows thru Chiang Mai and Tak. And like the Wang River that flows thru Lampang. And the Nan River that flows thru Nan and Uttaradit. In the old days this rivers have been important ways of transport before the time of roads and airfields. Another "lesser" river is the Bang Pakong River that starts where the Nakhon River and Prachinburi River meet at Ban Sang and mouths in the Gulf of Bangkok just north of Chonburi.

As you see almost all rivers go from North to Central and there are actually no rivers that make a real east-west connection. Most rivers can be navigated by boat, although there are some dams in some rivers. And in the dry season some rivers might have almost no water. One of the rivers that goes more or less east-west is the Kok River in North-Thailand. It originates in Burma and enters Thailand at Thaton and is passing Chiang Rai. It mouths in the Mekong River at Sop Kok. This river is famous for its boat trips that you can make from Thaton to Chiang Rai.