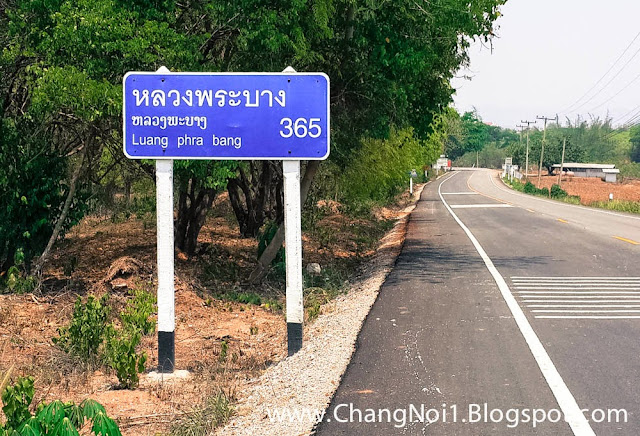 In 2015 I made a motorbike trip of 6 days riding from Khon Kaen in North-East Thailand to Nan in North Thailand but taking the road less travelled via Laos. For more motorbike trip reports in Thailand see MOTORBIKE TRIP REPORTS.

It was hot, bloody hot! So do not be so stupid as me and not to drink enough water along the way. When I arrived in the hotel in Kenthao I did drink 2 liter of water to start with, followed by 1 can of Sponsor, followed by a late lunch and a can of Coke. That all within 1 hour. And before sleeping I did drink another liter of water.  So from Khon Kaen I took route 12 to Chumphae and made a stop at the PTT just after Chumpae. There is a nice food court. From there I took route 201 in direction of Loei. Just before Wang Saphung I made a second stop at a PTT for a drink and took route 2140 in direction of Phu Ruae. Via this route you are passing the stunning mountain range of Phu Luang. Then I took a few km route 21 (or 203) and then route 2399 to Thali where I made a stop at the 7/11. The actual border is about 15 km from Thali town.

The Thai-Lao border is at the Thai side called Ban Na Kra Seang and on the Lao side Ban Nam Hueang. You will be crossing the Hueang River, a small river that contributes to the Mekong River. The border is open 7 days a week from early until late afternoon. It is an International border and on the Lao side is Visa On Arrival (take a pass-photo with you). It was all very easy and quick. But be aware that you need Lao insurance for your motorbike (or car). And that they guy selling that insurance considers the afternoon a waste of time (not much customers) so this day he did leave at 11:30. Actually I did see him but did not realizes he was the guy I needed. So no insurance for me. In Kenthao there is no office of selling insurance, in Paklay they stopped doing it and in Sayaboury they only had 1 year insurance. So never mind.

Kenthao is about 10 km from the border and it is a sleepy transit town. There used to be a local ferry over the Hueang River. There are a few Guesthouses and restaurants. That's it! Telephone signal from Thailand can still be used. And there is a ATM (right in front of my hotel). I did stay at Ivy Guesthouse and I had a late lunch and dinner at "Sabai Dee Restaurant".


I left very early via route 4 in direction of Paklay where I planned a stop for breakfast. Paklay is originally the place to cross the Mekong River by ferry (coming from Vientiane). The ferry is still there but the building of the bridge goes on and is planned to be finished  in 2016. Also Paklay is a small town based on transport of mostly wood (so most of the trees are gone now).


After breakfast in one of the many small restaurants I continued via route 4 in direction of Sayaboury. After 9 o'clock it became bloody hot again and the all area I was passing did look dry, very dry. Passing many small Lao villages and empty rice fields.

In Sayaboury I did stay at SayfonChmysai Guesthouse and did eat in one of the small restaurant along the main street. Along the river near the bridge are many small restaurants that in the evening function as meeting and relax place for the local young people. After Sayaboury it is only 120 km to Luang Prabang. It is said that this all route is being build new, even with a new bridge to cross the Mekong River. So this is a great new route from Thailand to Luang Prabang. As the first photo showed only 365 km from the border to Luang Prabang. Just before Paklay there is also a brand new good road going to another new international border crossing (open since Feb'2015) of Phu Soi Dao. The border is open 7 days a week but there is no Visa On Arrival on the Lao side. At least not yet. O ... and be aware of the fact that Sayaboury is also written as Xaraboury or Xaignabouri or Sainyabuli.

Road conditions : Total distance of 216 km, all good roads. But ... a good rainy season could change that dramatically in the mountain area's.


Day 3 From Sayaboury to Nan (Thailand) 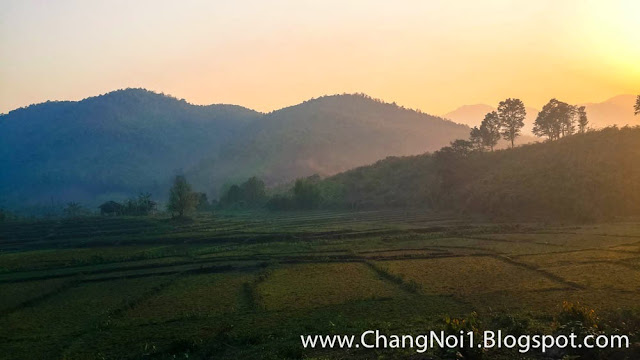 Again I did leave very early (about 6:00am) and took route 4a to Hongsa thru the mountains. And it is one of the most beautiful parts of the trip. First of all with beautiful with views and trees. But also many small village from hill-tribes living in that area, like the Malabri and Tai Lue. So I did stop a few times to watch village life like 30 years ago. While riding in the early morning you see kids going to school and people going to work in the mountains. Now there are not much schools so some kids have to travel far and long. I did pass a small group of kids on bicycle. Going hill up they walked up and then down with the bicycle. But the school was at least 15 km further. Yes, everyday 15 km in the mountains to school and in the afternoon back again. Amazing! 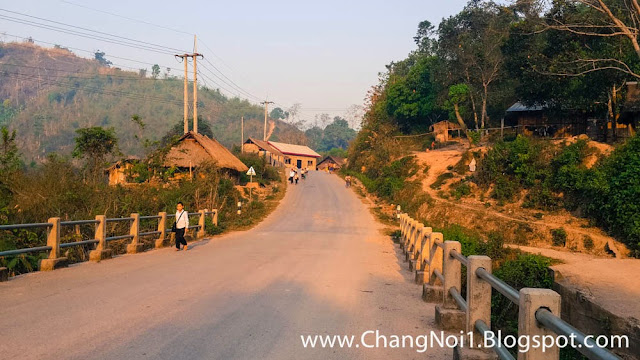 I made a stop in the sleepy town of Honga and had breakfast at Tonyom Restaurant. There a few more restaurants & guesthouses in town, as the little town is roughly waken up by the construction of the Hongsa power-plant (by China). Mind you this is going to be a coal power-plant! In Nan I did stay again at Nan Lanna Hotel and had a lunch at Udee kinDee Restaurant and breakfast at Hot Bread. All my favorites in Nan. While staying in Nan I made a early morning day trip to Mae Charim via route 1168. What a stunning road in a beautiful mountain area. Only a shame that so many beautiful forest has been destroyed in favour of agriculture of corn (thank you CP Group Thailand).  This is a great trip of about 100 km. For more information about the beautiful Nan province in North Thailand see Destination Travel Guide Nan - Thailand.

Road conditions :
From Sayaboury to Hongsa was 83 km and goes thru the mountains with some very steep parts. The road did vary from good to not so good. But again a good rainy season could change that dramatically in the mountain area's. From Hongsa to the border town Huai Kon (Thailand) was 40 km and the road is a brand new 2 lane highway (sometimes 4 lanes) thru the mountains. Actually it is a racing track. Build and paid by China. Only when exiting Hongsa in direction of the power-plant there is the building of a new bridge so you have to go thru a pit. From Huai Kon to Nan via route 101 was 138 km, all roads in good condition although they are working as some points to widen the road (and make new bridges). So total distance was 261 km. O ... wait ... on the way to Hongsa I think there were 2 new bridges being build and I had to go thru a pit. As long as it is not raining no problem. Not a good idea for a normal sedan car anyway!

Day 4 From Nan to Dan Sai

As always I left very early and it was lovely cool weather as there had been a huge rain & thunder storm the evening and night before. Just before Phrae I made a side trip to Song to meet a Dutch friend of mine who has a home-stay there .... The Red Brick House.  So after a nice chat and healthy breakfast I continued to Den Chai where I made a stop at the PTT to refill myself and my motorbike. After that it was to Uttaradit and Nakhon Thai where I made again a refill stop for myself only this time. I had planned to eat here but the small (good) restaurant was closed. Actually good because I found a new restaurant in Dan Sai. As usual I did stay at Mountain-green-resort. Simple, cheap and a great view over Dan Sai. About 200 m from there is a new restaurant Hug @ Sabai Dee. A great place to eat & drink! 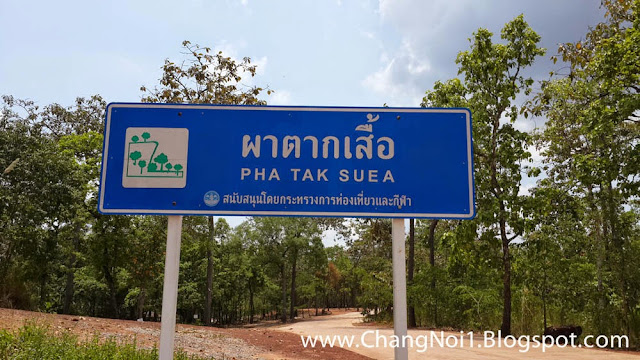 It is about 120m higher as the Mekong River. And from there is also a great jump-off point for hang-gliding. Of course there is also a temple wit a group talk happy monks .... and some Buddha images.

After a good breakfast buffet at Centara Hotel I left Udon Thani and did ride straight back to Khon Kaen. A bit boring and sometime busy road. At Nam Pong I made a refill & relax stop.

Road conditions : Total distance 120 km (via route 2), all good road. So total distance without the day-trips in Nan was 1.574 km! 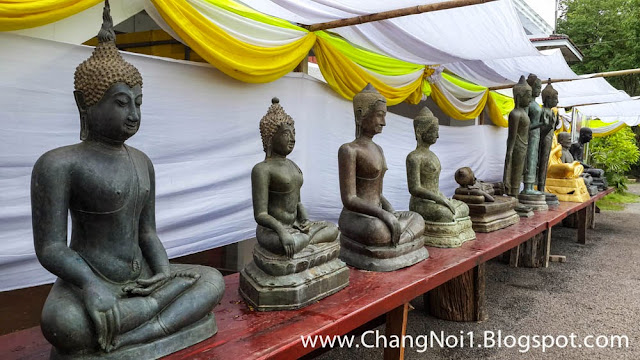 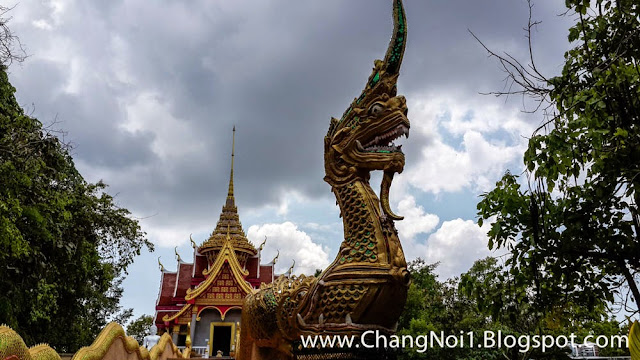 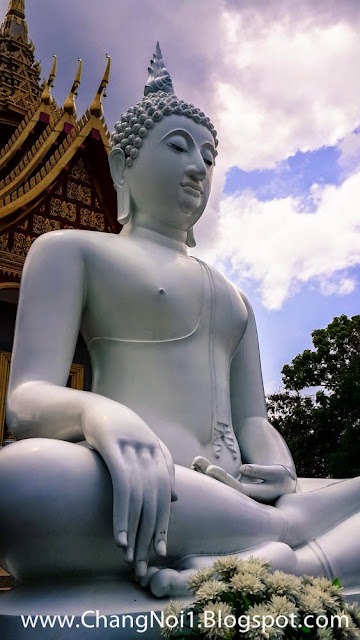