A flapron of flight Flight MH370 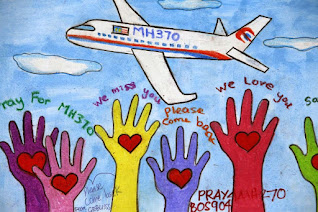 But on 29 July 2015 a piece of a flaperon from a Boeing 777 was found on the island of Reunion. Everybody was exited, it had to be a part of MH370. This news was all over the media all over the world. The part was transported to a special investigation center in France and specialist from Malaysian Airlines and Boeing were send to French. Soon the family of the people missing would have some more information. Soon we would all know what this part is. Soon .... became days, became a week. And then finally the PM of Malaysia announced that "the part found was confirmed to be a part of MH370". But later we hear conflicting information from Boeing specialist .... "it is very likely to be a part of MH370". Did the PM of Malaysia (again) speak to much and wrong?

The New York Magazine did write a good piece about it (although they also link to other very unlikely gossip style ideas). Have a look at New York Magazine
What ever happens to decommissioned Boeing 777's, what ever happens to spare-parts for Boeing 777's? I myself find it weird, first it is world news and suddenly it is forgotten again. So what really happened in that special investigation center in France?