Update on the flooding in Nan province 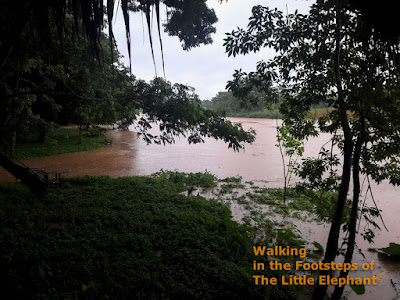 17 August 2016 : Since yesterday it did not rain anymore and the water-level is going down. It is now about 3 meters lower as the highest level 2 days ago. Our village has never been really damaged, although the rice-fields around the village have been flooded. But the rice looks fine again now.

A bit north of us in the area of Tha Wang Pha and Pua the flooding was worse and there has been damage to houses, roads, cars and motorbikes. Nan city have been partly flooded and was until yesterday evening still partly flooded. South of Nan city at Wiang Sa the water-level was still high yesterday (there the Wa River contributes to the Nan River). Although it seems that the flooding is over now some people lost their house, crops and/or car/motorbike. And it might not be over yet as the weather forecast tells us that there might be more rain coming. I hope that all people and businesses in the affected areas are not too much hurt by this recent flooding in Nan province. Let's all hope that it is over now.
Click on the labels to see more : Thailand Travel-Tips Weather
Click on the link to see the location : Nan, Thailand