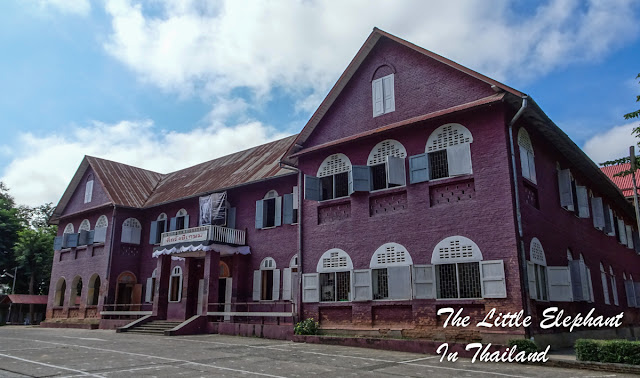 The Nan Rangsri Kasem Museum is housed in the Nan Christian School better known as the Red Building as someone once had the idea to paint all buildings red. The building is more as 100 years old and is located on the compound of the Nan Christian School that is still used with more as 2.000 children. The new school is behind the old building. But be aware there are 2 Red Buildings, this one on the photo (where the museum is) is the old Girls School. About 500m further is the Boys School.
Entrance to the museum is free, although a donation is appreciated. You can walk around yourself or ask a ex-student to be your guide. Following are some photo's I took and I will start with some older photos & explanations from the building and then photos & explanations following the guided tour. For more information about Nan province have a look at my Destination Travel Guide Nan.


Here you see 2 older photos from the "Girls School" building. It is build about 100 years ago after the building of the "Boys School" (so the boys school is about 6 years older). The building has been build in 3 steps ... first the middle building that was used as office down-stairs and 2 class-rooms upstairs. Letter the left part was added as housing for the management / teachers (as in the photo above). Then later the right part was added that was used for class-rooms. The ground floor of the right building is still in use. Behind the building is the new school. Sadly about 20-25 years ago the then head master of the school had the splendid idea of painting the buildings red. Some people argue that the red paint covers the beauty of its original brick work design. Well I disagree with that and it might have protected the bricks from corrosion. It is still a beautiful gracious building. And luckily mostly spared from modernisation. And luckily the current renovation is done very minimal and in a nice way. The building is build on fundaments of big (huge) stones. I wonder from where?


So we started the guided tour in a small room in the right part of the building. It a small exhibition of"pre-historical" artefacts that proof that there have been people living in the area of Nan long before there was a Kingdom of Chiang Klang. And there are some artefacts from the old days of Nan city.

The history buff's might wonder why not some photos of the old days of Nan city. Well first of all I was not supposed to make photos at all. And secondly most photos had no point of recognising so they could be made anywhere. And something I learned during the guided tours is that during the 50's and 60's many old houses and buildings have been demolished. What a shame because there have been some beautiful colonial style buildings. And some beautiful Northern style wooden houses (of what are only a few left in town). From there we did continue to the main building what is actually the entrance. This is a small exhibition of furniture from the missionary and information about the building itself.


At the beginning of World War 2, when Thailand was officially in war with the USA, the American missionary of the school were relieved of their duties and management was taken over by Thai noble's of the Nan city. While the missionary kept on working at the school. A construction that continued after WW2 until today.


Seeing the building and rooms in an almost originally state it is easy to imagine the life of the missionary living here in Nan about 100 years ago. The road to the Nan was a jungle track, one the the reasons why there are so many small air-strips in North Thailand. And elephants were roaming Nan like nowadays dogs do.

After that we went upstairs where were the classrooms. All rooms are decorated with photos. Some of daily life in Nan city but most about people connected to the school.