A missing Buddha at the Wat Chai Watthanaram in Ayutthaya 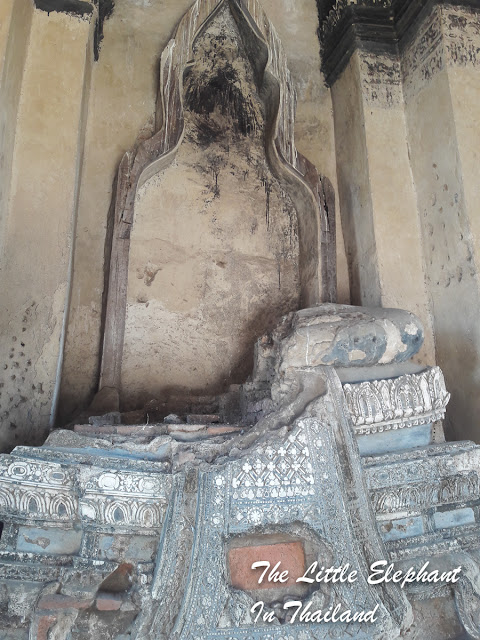 Ayutthaya, the former second capital of Siam (as Thailand was called until 1932) is nowadays a modern city where you find the remains of the ancient Ayutthaya Kingdom with many temples and Buddha images. In 2017 I did visit the Wat Chai Watthanaram. Photo above is the place where once was a beautiful Buddha image. A victim of stealing Buddha's or victim of the myth that there would be gold hidden in the Buddha? After the destruction of Ayutthaya by the Burmese in 1767, during which also Wat Chai Watthanaram was plundered, the temple was deserted. Theft, sale of bricks from the ruins and the beheading of the Buddha statues were common. It was not before 1987 that the Thai Department of Fine Arts started to preserve what was left. (Thanks John). If you are interested to visit Ayutthaya or any other place in Central or North Thailand, please contact me by email at1 The Little Elephant Traveling in Thailand.
Click on the labels to see more : Ancient-Temples Ayutthaya Central Thailand Temples Thailand Traveling
Click on the link to see the location : Ban Pom, Phra Nakhon Si Ayutthaya District, Phra Nakhon Si Ayutthaya 13000, Thailand