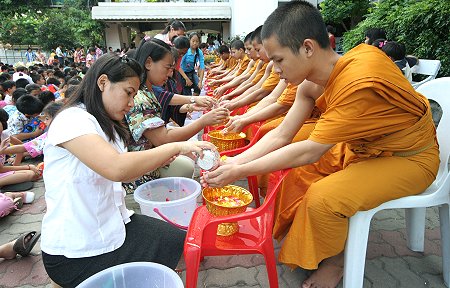 The Songkran festival is Thai New Year and is celebrated on 13 April, although 14 and 15 April are also official holidays (each day has another function in the festival). Sonkran is also celebrated in Laos, Cambodia, Sri Lanka, Myanmar and in some parts of India, Vietnam and China. Traditionally with Songkran people will sprenkel water over monks and elderly people. But world famous has become the "Songkran Water Festival" in Thailand, especially in Bangkok (Khao San road), Chiang Mai and Pattaya. But due to the fact that Thailand is still mourning the death of King Bhumibol at some places the Songkran festival might be "toned down". Like at Khao San road in Bangkok, as this street is near the Royal Palace. With Songkran many Thai will return to their home village. So that means businesses will be empty and the streets of Thailand will be full. As well all busses and airplanes will be full. And this week of the year will be the most dangerous week of the year as of traffic accidents. So be careful out there! Enjoy Songkran but be prepared to get wet!
LABELS : Festivals Songkran Thailand Travel-Tips