The 13th Memorial Service of Phu Phayak in Nan province 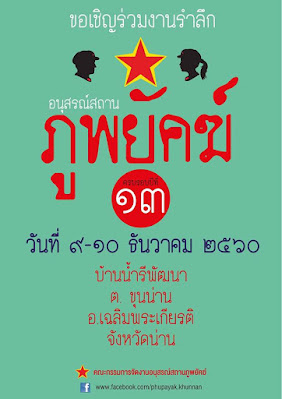 At 9 and 10 December 2017 there is the 13th Memorial Service of Phu Phayak to remember reconciliation of the past disagreements.  A great event to visit and meet some of the first-hand witnesses of troubled times in Phu Phayak. But a bit difficult to get there and there is no accommodation nearby.
Phu Phayak means Giant Mountain and it is a mountain range in the most north-eastern side of Nan province. It was once the place for opium farming (poppy fields) and the battlefield between the Thai soldiers and Communists soldiers in the 1970's. It is famous as being one of the last strongholds of the Communist Party of Thailand (CPT). The reason for having a HQ in this area was of course the difficult accessible mountain range that is bordering (communist) Laos. The area is also home to ethnic minorities (Lawa & Hmong) who came from southern-west China. The main village is called Ban Nam Ree Pattana, located in tambon Khun Nan in Chaloern Phra Khiat district.
Nowadays the area is home to a few villages that are supported by a Royal Project Phu Phayak to help local people in a sustainable existence without growing opium. Now Phu Phayak is producing the famous Phu Phayak Coffee that is sold in Nan and even in some places in Bangkok.

And nowadays there is a Communist Memorial to honour the communist soldiers fighting the Thai government. The museum and memorial was officially opened in December 2005 and is the result of combined efforts of local people and ex-communists to reconcile the past disagreements. The museum shows the history of the ex-communist centre, the story of Ban Huai Chanin rebellion against unfair taxes and the stories of the battles.