On the motorbike making a loop in North Thailand 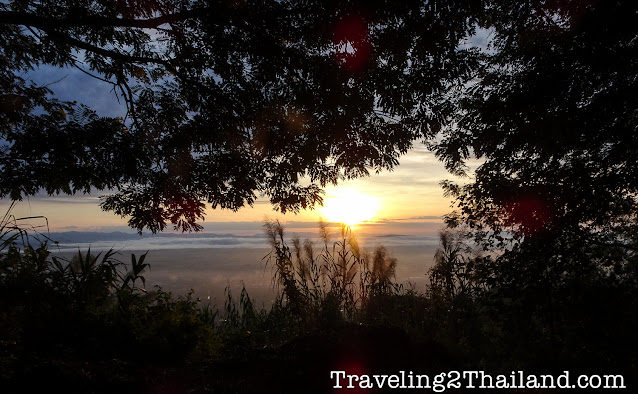 In 2017 I was riding my Kawasaki Z250 and made a motorbike trip in North Thailand. It was time again to extend my Carbon tyre-print so I planned a short week for a small loop in North Thailand. The plan was (but failed a bit) to redo a trip I did last year but due to bad weather the trip last year was a bit foggy and wet. No rain this year but at some points (of course high in the mountains a big foggy). A small loop of total 1.091 km in 4 days. Following is a trip report with photos & text. For more Motorbike Trips reports click HERE. If you like some help with organizing your motorbike trip or holiday anywhere in Thailand send me an email at The Little Elephant Traveling in Thailand.

I left a bit late at 7:30 in the morning and took route 1148 and had again breakfast at Phu Lankha, also called Magic Mountain. After breakfast I continued to Chiang Kham for a pit-stop at the PTT Gasoline station for both the motorbike and me. After that I took a bit weird route to Mae Sai via route 1020 and somehow I manged to get on route 1290 passing Chiang Sean and the famous Golden Triangle where I had lunch while overlooking the mighty Mekong River. After Chiang Sean I continued on route 1290 and then 1041 to Mae Sai. I day of 292km on the Thai back roads. I did stay overnight at Chour Palace Hotel what has private parking and good rooms. Good place to stay in Mae Sai! In front of the hotel was a road side food-stall selling good hamburgers! So I also had a bikers dinner.

I like Mae Sai and explored it a little bit. It is actually much bigger as I always thought and in the evening it becomes very busy when the main street in turned into a huge market. The little town is actually full of markets, shops, hotels and of course temples. Good vibes and colourful place in the evening.

I left a bit earlier as the first day, now I left at sunrise. Before leaving Mae Sai I made a stop at one of the small temples on the ridge of the mountain range along what Mae Sai is build. Nice view over the big city of Mae Sai & Tachilitek. I took route 1149 along the Thai-Myanmar border, unfortunetly at the hight of about 1500m I was fully surrounded by clouds and there was not much view over Myanmar from the military check-point. Just before the Thai military base I noticed an bamboo fortification with a sign "Myanmar Military Base" .... right along the road! This route seems to become popular, looking to the new Coffee Shops and Home Stay's that are being build along the route. I kept on following route 1149 to Doi Tung where it was luckily not busy and changed to route 1338 and route 1130 to Doi Mae Salong. I love that little Chinese mountain village, although it is not that off the beaten track village it was 15 years ago. The all area seems to have become a kind of Disney Land for Bangkokians. So I continued via route 1089 and route 107 to Chiang Mai. In Chiang Mai I did stay at Imm Thapae Hotel, for me an convenient t location, not expensive and they have private parking. A great day of 294km on the small mountains roads along the Thai-Myanmar border.

Chiang Mai? Well it is a big and busy city. Good place to do some shopping so I went to Chang Moto and Riders Care Shop. Both good shops selling helmets, jackets, etc., but did not buy anything. I also went to the Kawasaki dealer and had a look at the Kawasaki Z650 (2018 model). Nice bike but 283.000 Thai baht so I just bought a oil-filter for my Kawasaki Z250. In the evening I had dinner at Chez Marco Restaurant at Loi Kroh road. I actually did not really plan this day, but the rough direction was to go back to Nan and stay somewhere overnight. So I took route 118 out of busy Chiang Mai in the early morning at 6:30 with first a lot of traffic jams and then a lot of fog. Then I took route 1252 to Chae Son National Park (what I passed) , route 1035 en route 1335 to route 1 from where I did go a bit north to take route 103 to Rong Kwang (Phrae). I followed route 103 a bit and took route 1216 to Khun Sathan National Park for a pitstop at 1500m with a stunning view. At 15:00 in the afternoon I did ride down to Na Noi where I found myself (thanks Steve) the lovely and cheap Quidee Hotel and also a good restaurant. Both highly recommended. This was another day of great zip-zag trip in mountains, villages and making another 368km!
Na Noi? At first it looks like a boring little village at a intersection of roads. But there are a few resorts, restaurants, coffee shops and luckily also 2 gasoline stations. A nice little town to explore the southern part of Nan province.

I did wake up very early and at 5:40 I was on the motorbike to hit route 1083 for the 16km to Sri Nan National Park and Doi Samer Dao. The latter is famous for looking stars and a stunning sunrise view and it is an easy 16km ride to get there. Only the first 5km where dark and very foggy. Official Doi Samer Dao is part of a National Park and there is an entrance gate .... but at just before 6:00am there was nobody that I noticed. The road up-to the real top where also the camping is, is closed for cars and motorbikes. But 100m before is a nice view-point. A bit after Doi Samer Dao is a police check point from where you also can have a good view over the valley of the Nan River. Along the road are about 5 small restaurants serving drinks and food. I skipped that that as it was too early in the morning. After the sunrise show I returned back to Na Noi and took route 1026 to Wiang Sa and route 101 back to Nan town where I had breakfast at the lovely ladies of Hot Bread. A short day of only 137km, but with a stunning early morning ride.

The route up-to Doi Samer Dao is a nice road and the part from Na Noi to Wiang Sa is also nice twisty road between the mountains. But then route 101 from Wiang Sa to Nan and Tha Wang Pha is bloody boring.