A day trip to Pha Nang Khoi Cave in Phrae Reposting from 2018. Last week we went to the Pha Nang Kho Cave, in Thai called Tham Pha Nang Khoi as tham means cave in Thai. It is a beautiful and easy to access cave with of course according to Thai tradition an small temple in the cave. It is easy to get there with your own transport as it is only 800m from Route 101 between Phrae and Nan. Just 4 km north of Rong Kwang. The cave is open from 8:30 to 17:00, entrance is free and is inside beautifully illuminated with coloured lights. And also important there is a safe walking path inside. So you can not loose the way, as it is also a path with a more or less a death end. So you walk the same way back. Must be said that although there is good light inside it might be handy to have a flash light with you to see the floor better. I loved it, everything very well taken care off, clean and safe. If you like caves highly recommended to go here.

At route 101 are signs in English for the cave, you will arrive at a parking place where you can buy food and drinks. From there you have to walk up for about 15min on reasonable good steps to the entrance of the cave. There are 2 routes that lead to the same entrance, the left is the little bit longer way but has a nice view point. The right path is passing the small temple at the foot of the mountain. Once inside just follow the walking path, go & back will take you about 20min with time to make some photos. All together I would say 1 hour time to spend here.

Some information from Caves & Caving in Thailand :
The cave is only 14m deep and 43m long and was first visited by speleologists in 2003. But of course locals have been there already long time before that. The cave is formed in Upper Triassic limestone. Near this back entrance there is a large stalagmite which is supposed to represent a mother and child which has given rise to a legend regarding the cave. In this ancient and famous legend a king's daughter is saved from drowning by a soldier and she then elopes with her saviour and has his child. The king, furious at their behaviour, sent men after them to ambush the soldier as he left the cave. Unaware of his death, the princess waits eternally for his return and the stalagmite is said to represent the princess and her child. For more about caves in Thailand see Thailand Caves. 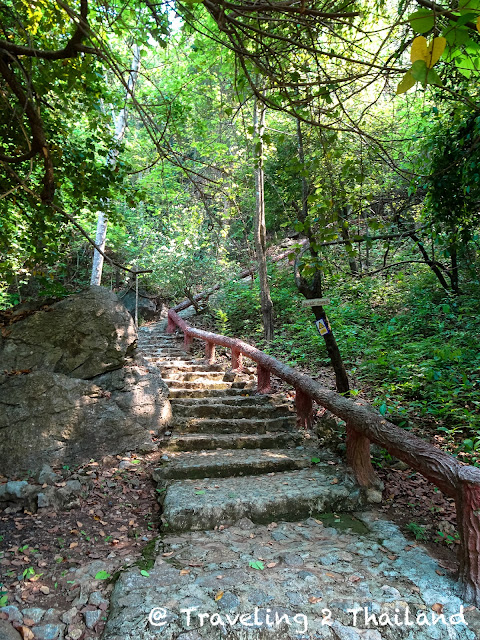