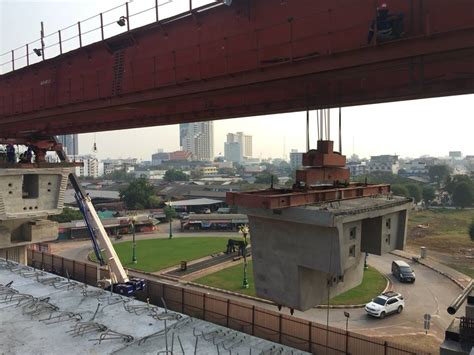 After visiting the family of my wife in Khorat we did go to Khon Kaen, where we did live from 2011 to 2016. Khon Kaen has become much bussier as when we were living there and we were shocked by all the construction that is going on. Above the railroad is being build an elevated rail. The main train station of Khon Kaen is gone (see my posting about Khon Kaen Train Station) and 2km south is an temporarily train station build. I was wondering what this elevated railroad is for. The high speed railroad from China to Bangkok? The light city rail for Khon Kaen? No none of that all. It is the double track railroad between Nakhon Ratchasima and Khon Kaen. At least that is what I was told. Now I am not a construction engineer but to me it looks too small to be double track. And where are they going to build the high speed train line from China? And where are they going to build the Khon Kaen Light Rail track? And will the old railroad still being used for cargo? Well never mind This Is Thailand.

We did stay at a hotel along Bung Kaen Nakorn, what is since ages the most famous lake in Khon Kaen. A few years ago they did build an all new boulevard along the lake and a bridge over the lake. But new minds came in town and now half of the lake is being removed to make place for an Educational Garden? And our previously used hotel the Kanyarat Hotel is gone .... and construction for an Ibis Hotel is in full swing and planning to open end 2019. Luckily Pomodoro Restaurant was still serving delicious pizza.
LABELS : Isaan Khon Kaen province Khon-Kaen Thailand Traveling
LOCATION : Khon Kaen, Mueang Khon Kaen District, Khon Kaen 40000, Thailand