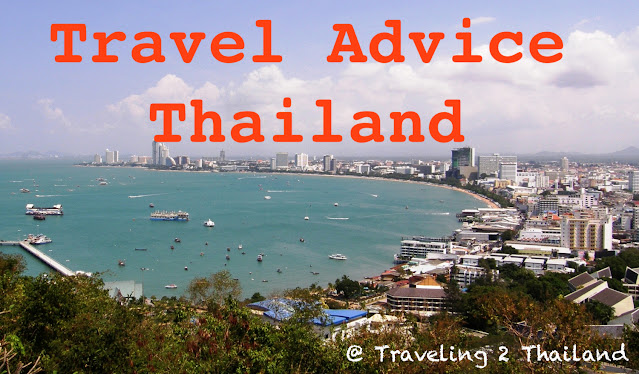 In my travel blog are many travel advice postings, this one is about traveling to Thailand in general. Most people will probably look for travel advice at the website of their home country. But how correct and up to date are they? As living & traveling in Thailand for more as 20 years I have my own opinion about traveling in Thailand and that is not always the same as the travel advice  from some countries. Why? Well because I think that first of all the relevant department might not not have the resource for an truly in-depth research into the ins & outs of the given travel advice. Secondly I think that the relevant department / country wants to protect themselves against claims in case something might happen. Sometimes this is bit a pity as unnecessary negative travel advice can have a big economical influence on a country like Thailand. There are many travel advices by governments, travel companies and all kind of other people. First some travel advice for Thailand from different governments :
Some of this advice are in my opinion far from the truth or reality. And some might even be politically motivated. So I thought lets do that my way and give my personal travel advice about Thailand, based on almost 20 years living in Thailand and traveling almost over all Thailand.

Warning : This is a personal travel advice made on 8 October 2018 and based on personal opinion and personal experience. This could be different as someones else experience or opinion.

The most important thing when you are going on holiday is your safety. In general Thailand is just as safe or unsafe as any country in Western Europe. But there are a few differences.


1.1 The 4 most southern province of Thailand

We are talking about the provinces Pattani, Yala, Narathiwat and Songkhla. The general travel advice of any country is : Only essential travel.

And if I would not know more about that area I would fully agree. One could say that there is a kind of civil war going on there, maybe to compare it with the old days of IRA in Ierland. And make no mistake since 2004 more as 6.000 people have died in this kind of civil war or terrorisme actions. Now does that warrant such a strict travel advice for 4 provinces. In my personal opinion : No.

The conflict is very much local and mostly does not interfere with tourists. Most parts of the provinces are not dangerous at all. But there are some area's that I would indeed not travel. My advice is based on the experience of friends of mine traveling there or living there. So my personal advice would be : Travel all over south Thailand, but in the 4 most southern provinces check carefully in what area's you are going to travel and check the current status. For more information about traveling in southern Thailand read Exploring the Deep South of Thailand.

Lets be honest, traffic in Thailand is dangerous. Thailand is very high on the list of traffic deaths worldwide. Accidents happen here due lack of good law enforcement, lack of traffic education, bad roads and people having faith in their karma. Speeding and drunk driving are a major reason for accidents in Thailand. My advice : Enjoy traveling in Thailand but be very careful when on the road and :

As I am a motorbike rider and did ride more as 60.000km in Thailand I would like to add the following :

Thailand is not know for natural disasters like earthquakes, volcano eruptions, typhoons or hurricanes. But during the raining season from June to November heavy storms during the monsoon can cause disruption and damage including flooding and landslides. As a matter a fact in some places there will be flooding every year. My advice : Do not travel or hiking in mountains during or soon after rain.

Crime is in Thailand more or less as in any other country, although lack of law enforcement may encourage some people to commit a crime a bit more as in other countries. My advice : Use common sense and also do not automatically trust fellow travellers.
Also be aware that especially Thai male can be very easy upset and that people carrying a gun is not uncommon in the nightlife scene.

Thailand is not as Western Europe, Dengue and Malaria are present in some parts of Thailand. For both are no medicine / vaccines that protect you 100%. As a matter a fact some malaria prophylaxis may be harmful to your health. My advice : Do not bother the medicines but bother about taking care that you have as less as possible chance of getting infected (bitten by mosquitos).

For other diseases common sense is the best protection. My advice is : Drink water from bottles and eat in proper restaurants.


2.3. The haze season in North Thailand

During March & April there might be smoke haze in North Thailand due to burning of farm fields. Known area's are Chiang Mai, Lampang, Mae Hong Son, Chiang Rai and Nan. If you are sensitive to this it might be advisable not to travel in those months in North Thailand.

But make no mistake also the air in Bangkok or some places in North-East Thailand can be unhealthy for sensitive people.

The law in Thailand is in general like in Western Europe, but there are again a few things you might not think of
That all said also be aware of the lack of law enforcement. So yes you will probably see people using or offering drugs, the chance that police will ask for your driver license is very small, you will see people flying a drones almost everywhere, you will see things that look like prostitution, you will see people topless sunbathing. So you still think "It is Disneyland"? That is fine but do not complain afterwards when it goes wrong.

OK this sound stupid but many problems are actually very easy to prevent. Use your brain! Do not leave your brain in your home country. Thailand is not a kind of disneyland. For me personally that means :