On the motorbike from Pua to Chiang Mai

It is cool season of 2019 and high time for a multiple days motorbike ride. So I left in the morning very early, for me that is about sunrise time. But as it was very foggy I left a bit later, 6:45am. And I did not get far before to make my first photo stop right in Pua. Following is a kind of Just Back Report with photos and some information about accommodation and stops along the road.


Day 1 from Pua to Phrao

I had not really intended that my destination for the first day would be Phrao, but I did choose my route and would see where I end-up at about 16:00. So the first day I extended my carbon tyre-print with another 343 km, starting in Pua and taking route 101 to Chiang Klang. Be aware that between Pua and Chiang Klang they did not start with road construction. From Chiang Klang I took route 1097 to Song Kwae and then route 1148 to Phu Langkha. A bit after Phu Langkha I took route 1188 to Pong and from there route 1091and 1021 in direction of Phayao. Then a little bit route 1 to take route 120 to take route 118 and 1150 to Phrao. Route 1097, 1148 and 1188 are stunning roads, reasonable good condition and great views. And hardly and traffic. My first stop on route 1148 is always for a breakfast at Phu Lankkha. My next stop was along route 118 at a brand new coffee shop called LoveSpoon Coffee House. And besides hot & cold drinks they serve delicious hamburgers!
When I arrived at Phrao I passed a few hotels on the east side of town, but for some reason they were all full. So I did stay at Phrao Boutique Hotel, that is not really a boutique hotel but good, big and clean rooms for only 500 Thai baht. More or less private parking but no roof for your motorbike. Personally I not care about that. I had never been in Phrao, did look for an restaurant but ended up buying food at the 7-11 and eating it at my balcony with view over the rice fields and sunset. 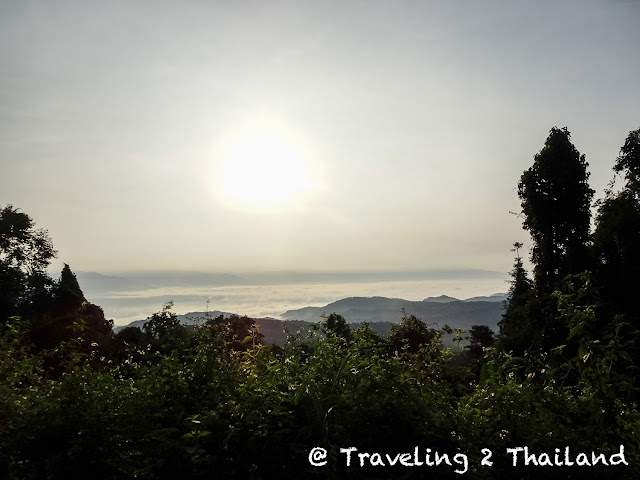 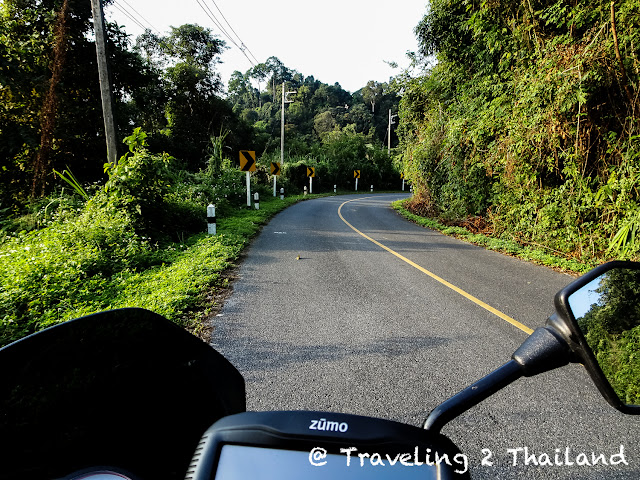 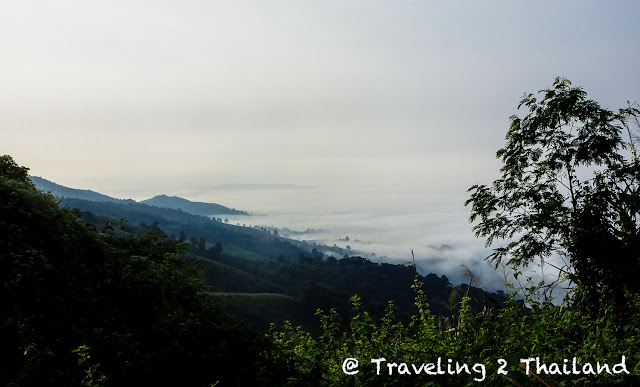 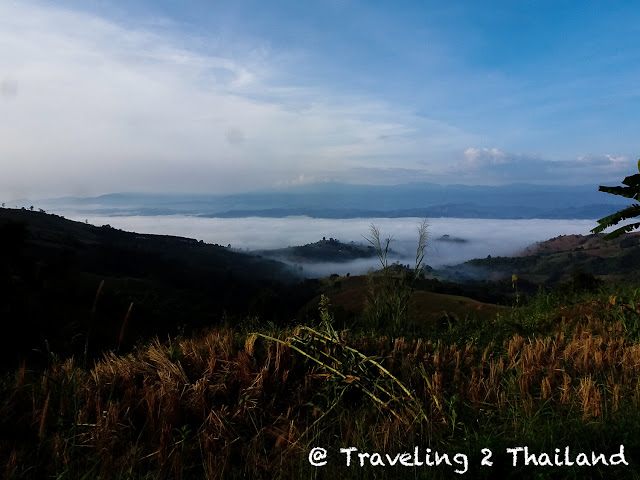 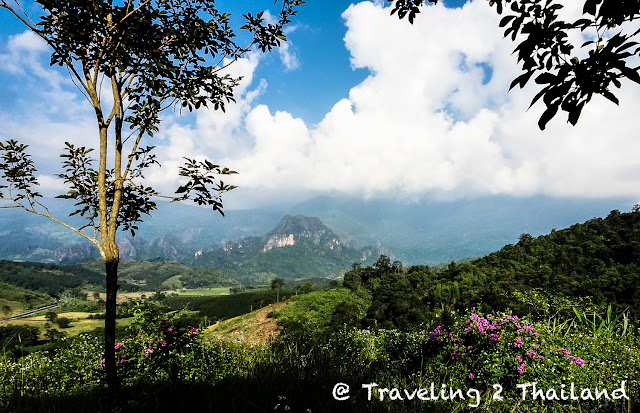 Day 2 from Phrao to Chiang Mai

From Phrao I took route 1001 to Chiang Mai, only about 100 km from hotel to hotel. And I had the idea of leaving about 6:00am but as it was very foggy I delayed that until 7:00am. It was still foggy but mostly no problem, although at some parts I did not see much. As it is only 100 km I did arrive early in Chiang Mai and checked-in at my standard place, Imm Thapae Hotel. Simple, clean and not expensive. And they have private parking. As my room was not available yet I took a extended breakfast at L'Opera French Bakery, my favourite bakery shop. Not for the nice shop but for the good bread & cakes.

I did stay for 2 nights in Chiang Mai, visited Chang Moto to buy some new Rivit gloves and in the evening I did enjoy the music at Jazz Cafe. Not be confused .... they never play Jazz music. But good live rock music, so I assume the name is a kind of Camel joke. 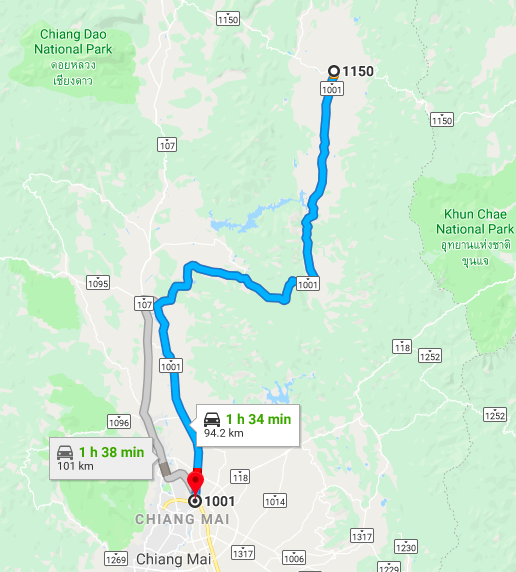 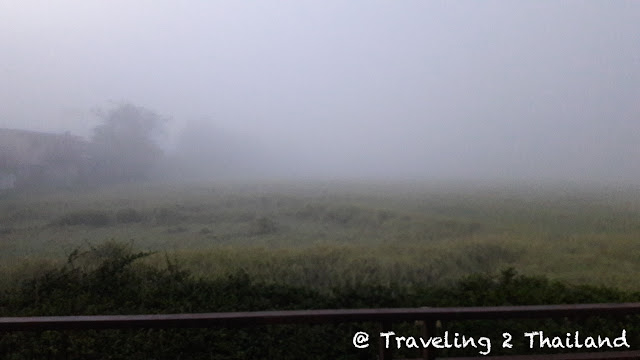 Day 4 from Chiang Mai to Pua

As I had an appointment the next day I took the highway back home, not my thing. So route 11 to Lampang and then route 11 in direction of Phrae, but halverway I took route 1023 to Phrae. From Phrae route 101 to Nan and from Nan route 1169 and route 1081 to Pua. Another 388km to add to my carbon tyre-print. A simple route, although I made a 2 detours. Taking route 1023 to Phrae and stopped along the way at a wonderful new coffee shop, The Picnic Farm Cafe. This place is managed by 2 young girls who are trying to create a kind of organic farm and convince the farmers in the village to do the same. There might be hope for Thailand! It located right along route 1023, about 25 km before Phrae and they have their own vegetable garden. And I took route 1169 to Pua and made a drink stop at one of the new coffee shops along the route. 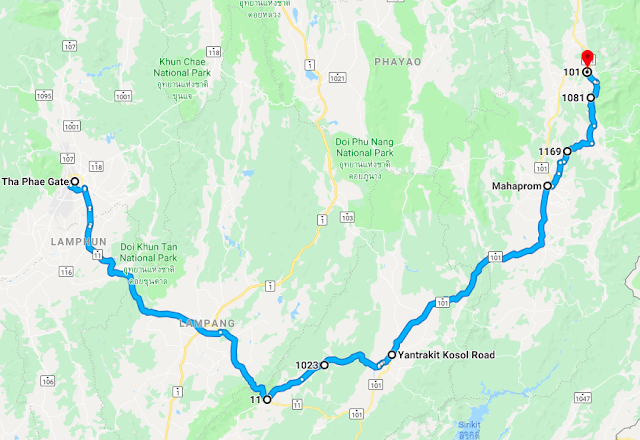 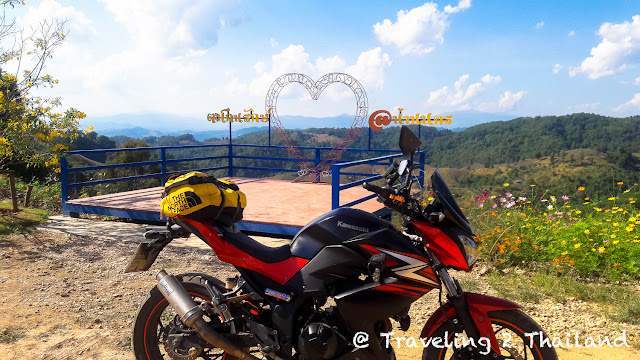