Taking a Songtheauw in Thailand 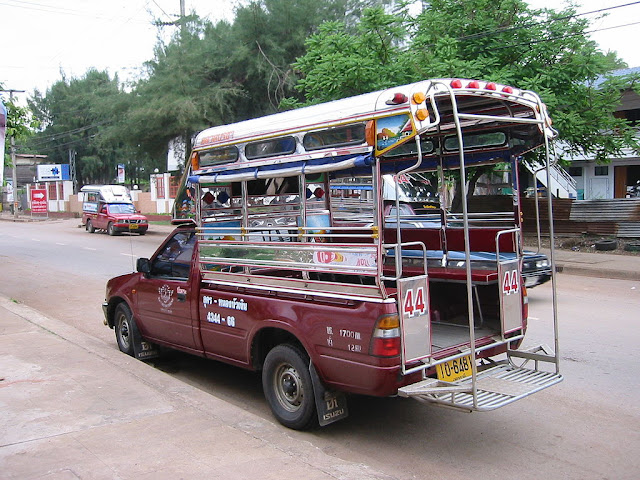 One of those Things Typically Thai are the Songtheauws, a mode of public transport. I am sure that anyone who has been in Thailand on holiday has used at least once a Songtheauw. In places like Chiang Mai and Pattaya they are very (in)famous. Most times it is a pickup car with in the back two (song) bench (theauw) seats for passengers and a roof to cover the passengers against sun & rain. But the number of passengers is not limited to the people sitting on the 2 benches. Sometimes there is a third bench in the middle and/or people are standing inside and/or outside. The Songtheauws have different colours in different cities, also as remark to what route they are riding. And in bigger cities also a number to designate the route they are driving. Basically they are riding a fixed route and stop along the route where people can flag them down. For this kind of transport is a fixed price ranging from 10 to 30 Thai baht, depending on the length of the trip. But some Songtheauws can also be hired as private transport, but you should negotiate a price BEFORE leaving. Also many Songtheauw drivers have the habit of over-charging "rich" tourists (Thai & foreigners alike). I would also like to add that in my personal opinion Songtheauws are not safe for highway transport. There are no safety belts and not much protection when the Songtheauw would have an accident. And accidents they have as many Songtheauw drivers are not known for driving safe.

As an add-on : In Bangkok you will also see small mini-van's that are in between a Songtheauw and a Tuk Tuk. And there are also bigger trucks that look like a Songtheauw but are actually used as a kind of bus (most times for example factory workers).
LABELS : Thailand Things Typically Thailand Travel-Tips