The 6 most famous Thai street food 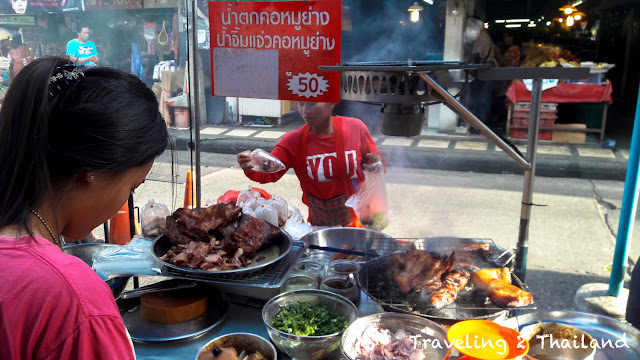 When traveling in Thailand you should really try some local street food, it is some of the Things Typically Thai. Thailand is famous for its delicious food and food is a big part of the way of life in Thailand and of Thai culture. You will find places to eat almost everywhere and if Thai are not eating they probably think about eating or buying food. So yes when on holiday you should at least try Thai food. But be a little bit careful. Some Thai food can be very spicy and some food has ingredients that might not be safe to eat if you are not used to it (like Pla ra).

A few other things about Thai food, many Thai dishes are promoted as typically Thai but in reality origin from India or China. And Thai food is promoted as delicious & healthy but the latter is not always true. In the Thai kitchen a lot of sugar and fish sauce (replacement for salt) is used. And the farmer growing the vegetables are very easy in the use of pesticides, also the one's that are worldwide forbidden to use. And be careful where to eat as not all street-side places take food-safety in high regards.


1. Phad Thai (fried rice) is a famous street food most times sold along the road in small carts. It is basically fried noodle with meat (chicken, pork or shrimp). Phad Thai is originally a typically street food thing but nowadays also sold in real restaurants. It is said to come from the Ayuthaya during the time of the Ayuthaya Kingdom although there are also other source that mention a more recent time.


2. Khao Phad (fried noodle) is another famous Thai dish that is sold both along the street or in real restaurants. It is basically fried rice with meat (chicken, pork or shrimp) and a little bit vegetables. And for westerners there is the American Fried Rice. My favourite is Khao Phad Pak .... no pork, no chicken, no shrimp. Just a lot of vegetables (pak) and without hidden chillies.


3. Kuay Teaw (noodle soup) looks to me like an dish from Chinese origin but adapted for Thai taste. It is sold along the street from food carts or at small simple kind of restaurants. The latter are the so called Noodle Boat Restaurants because this dish became famous as being sold from a small boat on the canals of Bangkok. But it is also served in real restaurants. And again there are many variations of course, first of all made with rice noodle or egg noodle. Secondly the meat can again be chicken, pork, shrimp / fish balls) or beef. And there are variations from different parts of Thailand like Khao Soi that is famous from Northern Thailand (actually a Burmese dish).


5. Kai Yang (bbq chicken) also know as Kai Ping most times sold at a place where they also sell Som Tam but also sometimes sold just along the road. Kai Yang is said to be originated from Laos and is in Thailand famous as coming from North-East Thailand (Isan). The real Kai Yai is sold as street food. The best chickens for Kai Yang are said to come from Wichanburi and along the road between Khon Kaen and Udon Thani is a village (Khao Song Kwan) that is famous for its Kai Yang. Kai Yang is a full BBQ chicken leg but sometimes they also sell other parts like the wings, ass, small chopped parts (a lot of small bones).


6. Khao Neeo Mamuang (sticky rice with sweet mango) is a kind of dessert (although the Thai kitchen actually does not have desserts). It is sticky rice with a little bit of coconut sauce and pieces of sweet mango. Delicious but not very healthy as it is full of sugars. Sold as street food but also in restaurants.