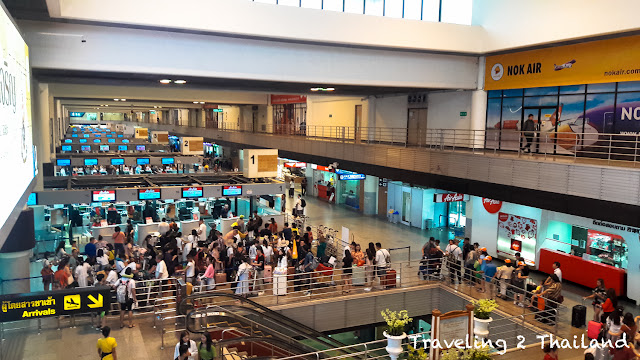 Traveling back from Saigon to Bangkok I did fly with Air Asia to Don Muang International Airport. I had a smooth flight, although we were a bit delayed already when leaving. And also most of the arrival was smooth. First a transfer bus from the airplane to the arrival gate. Then to immigration. In the airplane I had received my Arrival & Departure card that in Thailand is still used and still old fashioned has to be filled-out by hand (actually wondering what the use is of this arrival card). But as I did not have a pen with me I thought "I will do that just before immigration". Wrong!

Although just before immigration are desks where you can fill-out your Arrival & Departure card there are NO pens. And of course the nearby exchange boots are not going to borrow you one. I was lucky that a fellow traveler did just give me his pen. For the rest immigration was a breeze. Although only 50% of the counters were open it took me about 10 min to get thru immigration. And that included a few minutes waiting in que, taking a finger-print scan, taking a photo, checking my passport. Then I walked down to the luggage belt to pickup my luggage what was just on the belt when I did get there. So within 45min after landing I was outside at the arrival hall ready to take a taxi. Wrong again!

There were about 120 people before me in the que for the taxi and there were at that moment 4 taxi's! So I skipped that and I walked to the Airport Bus A1. But I had to wait for about 10min and then finally I was in the totally full bus to BTS station Mo Chit where I took the BTS to the station about 300m from my hotel. All together it took me almost 3 hours to get into my hotel! That is longer as I had been flying! Actually at 13:45 I took a taxi to Saigon Airport and at 21:00 I was at my hotel in Bangkok! That is 7 hours and 15min traveling!

At hindsight it might have been a better idea to walk from the International terminal to the Domestic terminal and take a taxi there as I saw there many taxi's waiting for customers. Or I could have walked to the departure floor of the International terminal and take a taxi there.
LABELS : Airports Bangkok DMK Don Muang Airport Thailand Traveling
LOCATION : Sanambin, Don Mueang, Bangkok, Thailand