The memorial of Bodisattya Thich Quang Doc in Saigon, Vietnam 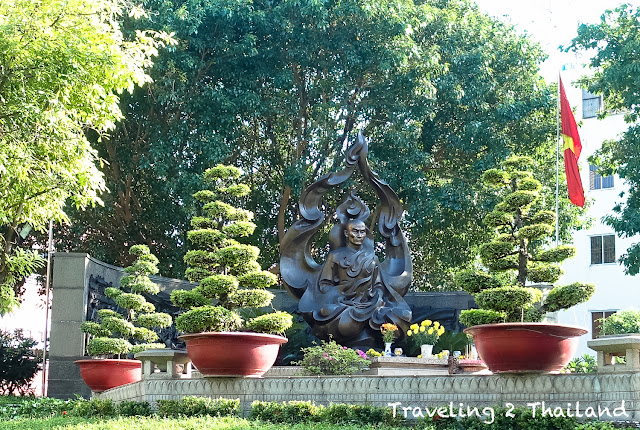 August 2019, while traveling 3 weeks in Vietnam I did of course tried to get lost and "found" near my hotel the memorial of Bodisattya Thich Quang Doc or also called "The Venerable Thich Quảng Đức Monument" at the intersection where Quảng Đức performed his self-immolation on 11 June 1963. Communisme and religion are not a good mix and in Vietnam there was a persecution of Buddhists by the South Vietnamese government led by Ngô Đình Diệm. As protest and way of creating awareness Thích Quảng Đức, a Vietnamese Mahayana Buddhist monk, burned himself to death at a busy road intersection on 11 June 1963. His act worked and worldwide condemnation of the Diem government (a US puppet government) followed, resulting in the overthrowing of the Diem government and assassination of Diem (although followed up by a not much better government of Van Minh). The memorial consists of a beautiful sculpture of Thích Quảng Đức surrounded flames of love. Behind the sculpture is a wall with sculptures expressing the oppression of the Diem government. The memorial is surrounded by a small park where in the early morning people come for Tai Chi. Following are some photos I took while visiting the memorial.

Warning : Be aware that the last photo (copied from internet) may contain graphic scenes as it is the world famous photo of Thích Quảng Đức's self-immolation. This photo was made by Malcolm Browne, who won the 1963 World Press Photo of the Year for a similar photo.
If you want to travel in Vietnam and need information or help about your transport, itinerary, tours or accommodation then send me a email at Contact @ Traveling2Thailand.