Motorbike Riding from Pua to Huay Xai in Laos 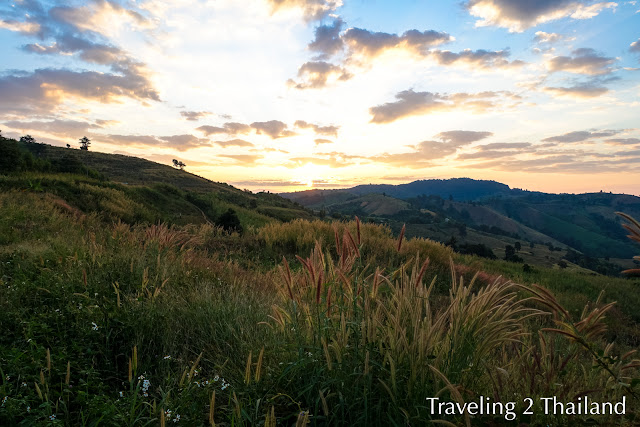 In November 2019 I made a motorbike trip of 3 days riding from Pua in Nan province to Huay Xai in Laos, and back of course as I am living in Pua. For more motorbike trip reports see Motorbike Trip Reports. I had not been motorbike riding for a long time and missing it. So I planned a 5 days Laos trip, but I could not leave on the day I wanted and had to be back sooner as planned. So it became a 3 days Laos trip. But never mind it was good trip, next time more time and better planning. As usual my trips begin and end in Pua, Nan province, North Thailand. Following is a full trip report per day with Google Maps screen-shots of the routes I took. On the ODO-meter I made about 667 km this trip, although on the maps its looks like about 582 km. During this trip I did cross the border between Thailand and Laos at the Thai-Lao Friendship bridge at Chiang Khong, North Thailand. And I must say this was one of the most relaxed and straight-forward border crossings I did from Thailand by car or motorbike. That said I do not understand why other Thai-Lao borders are so difficult or even closed.
If you want to travel in Laos and need information or help about your transport, itinerary, tours or accommodation then send me a email at Contact @ Traveling2Thailand.

Day 1 from Pua to Huay Xai 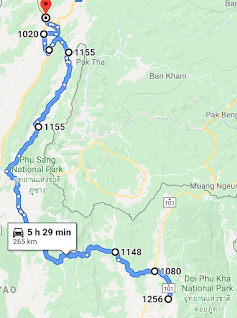 Until Chiang Khong this is an easy ride for me as I have done this a few times already. At 6:00am I left Pua via route 101 to Chiang Klang and from there route 1097 to Song Kwae along route 1148. Following route 1148 to Phu Lankha where I had hot choco at Route 1148 Cafe, my favourite place here. I had planned to have breakfast at the place next door but they were still closed. So after my hot choco I continued on route 1148 to Chiang Kham where I had my famous "biker breakfast" at the 7-11 of the "new" PTT Gasoline station on the south side of Chiang Kham. From Chiang Kham I followed route 1021 until you can take a right to route 1155. And I kept following route 1155 until you hit the Mekong River and I had a beautiful ride along the not so might anymore Mekong River. Finally route 1155 meets route 1020 from where you can take route 1356 to the Thai-Lao Friendship bridge crossing the Mekong River and the border of Thailand & Laos. I had never crossed this border here before and to my surprise it was a very relaxed and friendly experience. Although a bit time consuming, all together it took me about 90min before I was set to ride to Huay Xai in Laos. So first of all I needed some Thai money, so I went to a ATM at the Thai side of the  border (only 1 to be found at the arrival part). Then I needed copies of my motorbike registration book (green book) and my passport. Also that can be done at the arrival section. Then I needed to clear all paper work for the export of my motorbike. This was done at the Thai immigration office at the departure section (costs 200 Thai baht). Then I had to go to the departure booth to get my exit stamp for Thailand and go to the custom booth to get my Thai customs papers for my motorbike. Then I was all set at the Thai side of the border and clear to ride over the bridge to Laos. Just before entering the bridge you will cross from left-driving to right-driving. Be aware of this!

Once on the Laos side of the border I first had to get a Visa On Arrival and that is an interesting process. First you apply for it (I had no photo so I payed 20 THB extra) at counter 1. Then you pickup your passport with visa + entry stamp at counter 2. Then you walk thru Lao immigration and finally pay for your visa at a special counter. After payment you get a E-voucher that you use to go thru a gate into Laos. So now I was in Laos but my motorbike still at the other side of the Lao immigration. So I walked back did the import paper things at booth 1 and the custom paper things at booth 2. Then I still had to buy insurance for Laos (min. 7 days). Then finally I was set & cleared to enter the roads of Laos .... riding on the right side!

So I followed the Mekong River until I did ride into Huay Xai. Until there was the bridge to cross the Mekong River and border between Thailand and Laos you had to take the ferry here. And from there you can also take the slow boat to Luang Prabang. And the latter is what many tourists are still doing. But first it was time for lunch at My Laos Restaurant right along the Mekong River. And then it was time to find a place to lay my head. And I did find Riverside Huay Xai Guesthouse. It is a bit older but clean accommodation with private & secure parking. Some rooms will have view over the Mekong River but I did choose a cool room on the shadow side of the building. Good value for money, although the location is a bit touristic. After that it was time to explore Huay Xai a bit and of course I made some photos.

Remark : The last time I was in Huay Xai (Laos) was about 20 years ago, when it was still Laos. Looking to all the Chinese cars, Chinese signs, Chinese construction and Chinese people you would think that the Chinese border has been moved to Thailand. 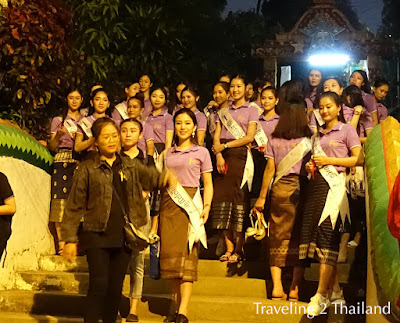 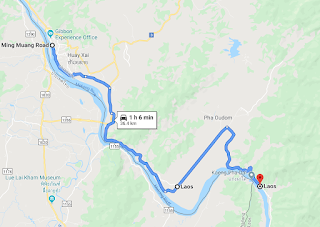 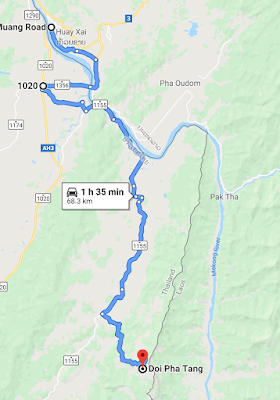 Then the second part of this day was riding from Huay Xai (Laos) back to Thailand again and then via route 1155 to Doi Pha Tang along the Thai-Lao border. This is a mountain that is famous for its sunset thru the "Door to Siam" (Phratu Sayam). I have been there a many times already so I skipped that but I always wanted to stay at one place I had seen. But first of course I had to cross the Mekong River and the Thai-Lao border, what was again easy and did go faster as the day before. Some people did recognise me and asked why  I was back so quick? My motorbike was checked this time but going back took me only about 45min. From the border it was again route 1356, route 1020 and route 1155 that goes again along my beloved Mekong River. So I had a snack & drink stop at a small shop next to a viewpoint stop along the Mekong River. I just kept following route 1155 until the signs for Doi Pha Tang and Phu Chi Fa to the left and took route 4029 and little bit route 1093 straight to Doi Phu Tang. I love this area! I was here about 12 years ago when it was not yet overrun by Thai tourists. Taking the road up-to Doi Phu Tang I stayed at the first hotel at your right hand side, Pha Tang MeiHua Resort. A bit overpriced rooms, but it is all about location. And the location is great! My room had a nice balcony and stunning sunset view. And of course I made some photos during my trip. 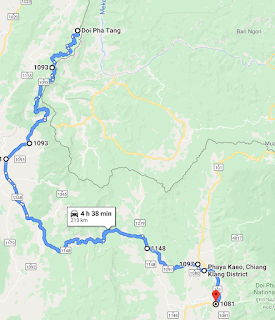 After waking up at 6:00am it was too late to still go look sunset at Doi Pha Tang. But I have seen that a few times already so no problem. Unfortunately at 6:45am it was still too early for breakfast (start at 8:00am!!) so I just left without breakfast and did ride to Chiang Kham for another bikers breakfast at the 7-11. So I took route 1093 passing Doi Chi Dao, Doi Phu Chi Fa and many, many, many resorts & campings. And it was bloody cold in the early morning on the shadow side of the mountains! Some parts route 1093 is in a bit bad condition. The finally passing Namtok Phu Sang and hitting route 4010 back to route 1021 to Chiang Kham where I again stopped at the same PTT Gasoline station for my breakfast and a hot choco at Amazone Coffee Shop. From there it is again route 1148 and route 1097 to Chiang Klang and via route 101 back to home sweet home Pua. Sorry not photo-stops this time!
LABELS : Chiang Kham Chiang Khong Chiang Rai province Doi Pha Tang Huay Xai Laos MekongRiver Motorbike-trips North-Thailand Phu Chi Fa Phu Langka Route 101 Route 1097 Route 1148 Route 1155 Route 1356 Traveling
LOCATION : Unnamed Road, Huay Xai, Laos