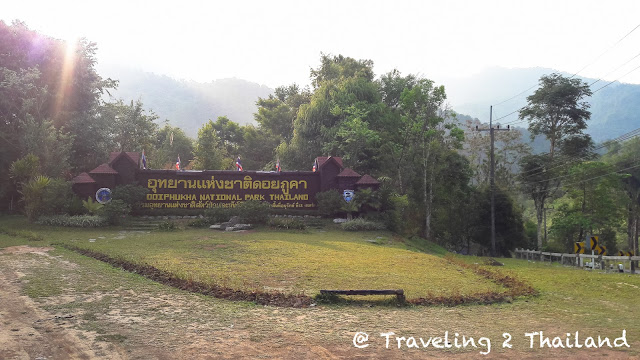 HOME - INTRODUCTION - GETTING THERE - GETTING AROUND - ACCOMMODATION - FOOD & BEVERAGES - TOURIST INFORMATION - MOTORBIKE RENTAL SHOPS - WEATHER
In Nan province are are 7 National Parks and a few smaller Caves, Forests, Parks and Royal Projects. Where nature meets adventure, great places for jungle trekking, enjoying nature or wild water rafting. Doi Phu Kha National Park is the longest stretched National Park of Thailand, bordering Laos and with the highest peak of 1.980m above sea-level. If you want to travel in Thailand and need information or any help then contact me via de mail-link under at this travelogue.

Since 2017 you are not allowed anymore to drink alchohol in National Parks, this thanks
to people who can not control themselves while drinking alchohol and start fighting or being a disturbance to other people (or animals).

Most National Parks have some simple bungalows or rooms as accommodation or camping grounds. But not all, check before you are going! You can make reservations ahead via the website DNP Reservations. The mountains in the National Parks of Nan are a magnet for Thai tourists during the cool season from November to January, especially in weekend or holidays. So plan your trip accordingly.

Following is a list of National Parks, Caves and Royal Project in Nan province with the distance from Nan Airport in Nan town.