Week 5 of Voluntary Self Isolation at StayHome 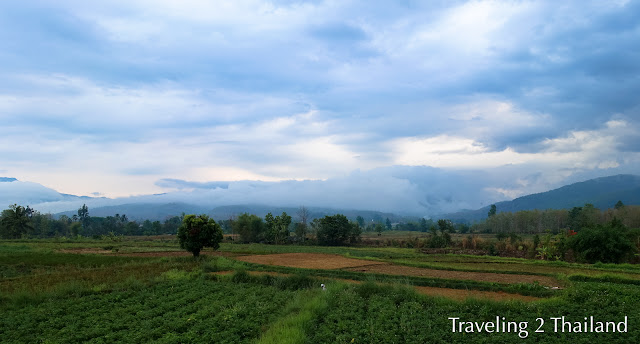 As there will not be any traveling in the next few months I will update you about living in Social Distance at StayHome during the Corona Crisis in Thailand. I started this StayHome thread on 22 March 2020 but actually since 15 March 2020 we are in a kind of self chosen isolation, we only go to town for shopping. This is week 5 at 25 April 2020. As usual I will start with the air pollution. According to Air Visual we now have a US AQI of 53 (moderate) with an pm2.5 of 13.1 µg/m3.

Photos were taken this morning at 7:02am. The beginning of the week was bloody hot but as forecasted since 2 days we have strong wind, thunder & lighting and a bit of rain. So last night we had a bit of rain and this morning again. And near mountains that results in beautiful clouds along the mountains. So no sunrise photos this time but "Talay Mok" photos. What means  "Sea of Clouds", especially best to be seen from on top of the mountains.

Well another week passed like it was nothing. We did some shopping again at the Tesco-Lotus in Pua and we did find a small restaurant that sells take-away pizza, made in a wood fired clay oven. Quite good and tasty, for only 150 Thai baht. So we wake-up, have breakfast, take care the garden, have lunch, watch a movie on Netflix, have dinner and sleep early. My wife goes sometimes to the local fresh market. And we get vegetable and chilli's from the rice fields of our neighbours farmers. Life is good and during the hot season I would not be traveling anyway.

As with many people February, March and April did not go as planned. In January we had guests in our homestay Non Na Pua and we had some bookings for February and April. So we planned to close in  March and go to the beach to escape the air pollution of North Thailand (thank you CP). But bookings were cancelled as well as our trip to the beach. So we closed our homestay Non Na Pua until end of May and we did stay home during the worst air pollution I have seen in 20 years living in Thailand. And although it is bloody boring to be at home and at home and at home, time did fly and it does not seem like more as a month. In Nan province we have until now still no confirmed Corona cases, you might be wondering if they do the test wrong and all tests end up negative. And in Thailand the numbers of confirmed Corona case are low (and getting lower as well) as well the number of people who officially died of Corona is low in compare to how many people are living in Thailand. Also you could wonder if it has something to do with selective testing. But do not not be mistaken it seems that this also happens in Europe.

In the meanwhile Nan province is still in a lockdown, no domestic flights and it looks like also next month there will be no domestic flights. Although all over Thailand slowly some Corona restrictions are removed to give people a bit more freedom. Personally I think that is much too early and I am sure we will stay a bit longer in Self Isolation. Also not sure yet when & how we will open our homestay Non Nan Pua again. I think there should be a minimum of 2 nights staying and there should be minimum of 2 nights between guests staying.