This morning I made a small motorbike riding loop from Pua to Song Kwae, and back of course. I did wake up with the sound of the temple bells and got dressed up for motorbike riding. When walking in the garden to open the gate I did notice that it was actually a bit raining. Well never mind, let's hit the road. My trips more or less always start at the PTT Gasoline station in Pua, from there I took route 101 to Chiang Klang. And in Chiang Klang I took route 1097 to Song Kwae, once in the mountains there was no rain anymore but it was cold! Luckily I was wearing my leather motorbike jacket, gloves and motorbike boots. Route 1097 passes a small mountain range with the highest point of 750m above sea-level, actually 2 times. You are also passing Tat Man Waterfall and 2 Hmong villages. Route 1097 ends at route 1148 and to get to Song Kwae you will have to ride 4 km north. In Song Kwae are some shops, even a coffee shop. But in the very early morning that was still closed. So I had a Ham & Cheese sandwich croissant at the 7-11, unfortunately they do not sell hot choco because due to the cold weather I would have loved that. After a snack I did ride back via route 1148 to Tha Wang Pha.  You will be again passing a few Hmong villages and a few km before Tha Wang Pha I to a left as a short-cut in direction of Pua. This route ends up at route 101 again, then it is just 10km back to Pua. It was a nice short ride but to clouded for nice sunset photos. The photo above is made from the short-cut to Pua, just before crossing the Nan River. Photo below was made along route 1097. And as last a photo of the route I did ride. Nan province is a great province of Thailand for motorbike riding. 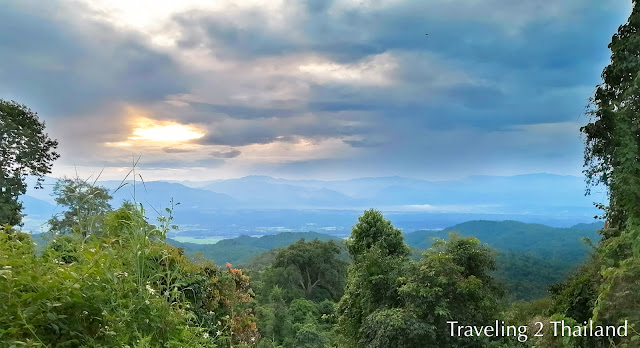 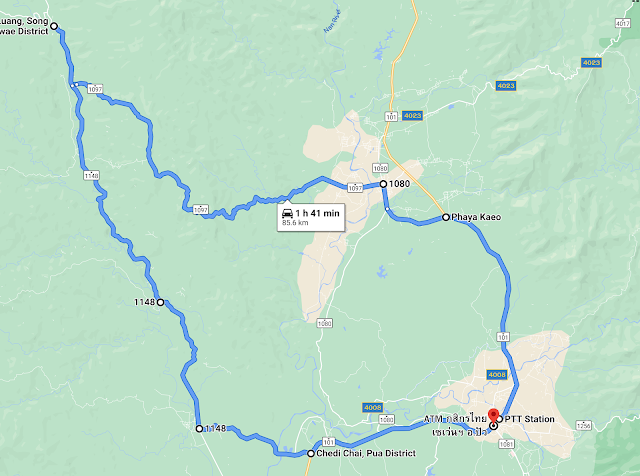