Following is a Motorbike Trip Report from November 2020. For more motorbike trip reports see my MOTORBIKE TRIP REPORTS. A multiple days motorbike ride was long overdue. So with a good excuse of buying a new helmet in Chiang Mai my first destination was set. The only question left was "What route to ride to Chiang Mai?". From Pua there are many routes to ride to Chiang Mai, but as I dislike main roads & highways I did choose as usual taking the "long way home". Photo above was taken in the early morning along route 1097. Enjoy!

As usual I did wake-up with the monks, I left at 5:45am when the sun just came over the mountains of Doi Phu Kha. First route 101 from Pua to Chiang Klang, boring but luckily only about 15 km. Then route 1097 from Chiang Klang to Song Kwae along route 1148. This route goes thru mountains and passing a few mountain villages. And there are some places from where you have a stunning view over the valley of Pua or over route 1148 to Song Kwae. And as there is a small river along route 1148 the valley there is in this time of the year most times full of low hanging clouds. Like a sea of clouds ... Talay Mok as Thai people call this. I really like riding route 1097!
Then route 1148 from Song Kwae to the point where route 1188 goes to Pong, passing Phu Lankha. Following route 1188 to Pong where I had a drink & snack stop at the 7-11. Then route 1021 to Phayao. Just before you enter route 1 there goes a brand new road to the left. As there were no signs I just did go straight to route 1 to connect to route 120. But later I saw a brand new bridge crossing route 1 to route 120. So that brand new road to the left was a new bypass! Then route 120 that connects to route 118 that goes to Chiang Mai. And here was a bit of a problem .... I knew that about 1 year ago there was road construction at route 118. So I asked around and I did get mixed answers. Some said there is still road construction, others said it is all fine. Well as I wanted to arrive early in Chiang Mai I decided to try route 118. The first part was fine, then there was a 10 km stretch of road construction. But that was OK. But then after 20 km there was another stretch of road construction. I think about 15 km long and more gravel and more cars & trucks. And it did rain a little bit. This was not fun! And my motorbike & me became very muddy. The last 15 km into Chiang Mai is busy and not pleasant riding.
A total of about 400 km almost all thru mountains, for the route see Google Maps. In Chiang Mai I did stay at Riverside House Hotel Chiang Mai, what is right along the Ping River near the Iron Bridge. Private parking, a few restaurants nearby and Rimping Market nearby. Following are photos & map of route of the first day riding in North Thailand. 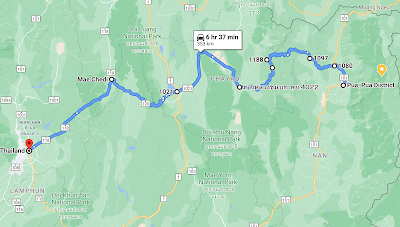 In the early morning I had some meetings in Chiang Mai and as I was early done I left Chiang Mai at about 13:00 with a first thought of destination Phrao. Easy to ride, only route 1001 and only about 100 km. But the first 20 km out of Chiang Mai were busy and there were a lot of muppets on the road. I arrived in the afternoon and made a first stop at Rain Tree Cafe, what is a Coffee Shop & Restaurant. Here I had a refreshing drink and did look for a hotel. I found Rai Boonsom Homestay (ไร่บุญสม-พร้าว) and I loved it! The owner is a friendly lady, serving fruit & juice. While relaxing in the rural garden of Rai Boonsom I had a chat with a friend about my next destination & route. In the evening I filled up the motorbike at the PTT and bought my dinner at the 7-11. 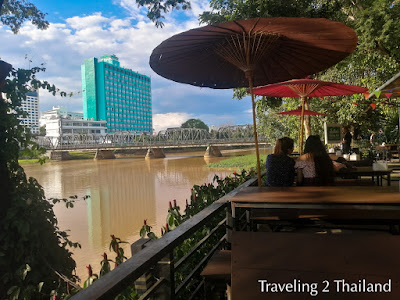 Again I did wake up with the monks and at 6:00am I was leaving Phrao for an unknown destination but I had figured out the first part of the route. First route 1150 west-ward and then route 1346 north-wards to route 107. After a short part on route 107 I took route 109 that connects to route 118. I loved riding route 109, stunning views, not much traffic and good road surface. Along route 109 I had a stop at Klang Doi Coffee. After a short part on route 118 I took a left for route 3037. Yes the 3037 again??!!!
The side trip explains my "again route 3037".... well I did read on facebook about a nice route near Fang, so I wanted to this nice route thru Doi Pha Hom Pok National Park. And on Google Maps this is also route 3037!!! I was lucky, no entrance check. So no National Park fee. Well the reason for no check & entrance fee was that there is big  construction, so actually the road should be closed. I passed 3 construction parts with gravel but at the last one I made a u-turn. Not on a Kawasaki Z250! But when the construction is done it is on my list to ride, looks like a beautiful area.
Back to the main route ... route 3037 from route 118 to route 1089. This route is passing an area with many tea plantations and I made a stop at the Chinese village Wa Wi (also written as WaWee). Here I had lunch at a local restaurant and a tea testing at WaWee Tea shop (next to/in front of the one an only 7-11 in the village). Lovely area and I will have to check-out the area again in the future. And also visit Doi Chang!
Well route 3037 finally crosses the Kok River and then hits route 1089 and then I thought "Let's go to Mae Salong". I love the little village of Mae Salong that is now actually not so small anymore. I thought it would be busy with Thai tourists but I was wrong, it was very quiet. I did choose Mae Salong Vintage Hotel, my room was huge and I had a big balcony with 270degrees view. In the evening I had dinner at one of the restaurants near the 7-11, simple but good. Of course there is nothing else to do in Mae Salong as go to sleep with the chickens.
Direct route 240 km but I added a side trip so total 270 km. For the route see Google Maps. Following are photos & map of route of the third day riding in North Thailand.

Again I did wake-up at about 5:30am and at 6:15am I was on the bike for the final leg of the trip.... back home sweet home. But when I did wake-up I did remember that I did last fill up my motorbike in Phrao and did ride 270 km. Luckily the Kawasaki Z250 has a 17 liter fuel tank. So when I started the motorbike it still had 3 bars of fuel. That is OK for riding about 30 km to route 1, but when riding after 5 km that was only 1 bar of fuel left. And along route 1130 are not much villages, let alone a gasoline station. So I was happy when I saw a coin-operated fuel station at the intersection with route 1338. I did put some money in it but no gasoline was given. A young boy did help me but also he did not get gasoline out of the machine. So he took me to a shop in the village where you can fill up from a big drum with gasoline. With 2 liter of extra gasoline I did feel safe to ride to route 1 and fill up there at a PTT station.
So I did ride route 1130 to route 1, then route 1 to Chiang Rai. But I did skip Chiang Rai and took the road along the airport that connects to route route 1173, route 1152. And then a local route thru a forrest park and passing Mai Ya Viewpoint. Then route 1174 to route 1020 and via Chiang Kham to route 1148 again. This time I made a stop at Phu Langkha for a lunch at The Balcony. And in Song Kwae I stopped for a drink again at a new coffee shop next to the 7-11. From Song Kwae again route 1097 to Chiang Klang and route 101 to Pua.
A total of about 280 km mostly thru mountains, for the route see Google Maps. Following are photos & map of route of the last day riding in North Thailand. 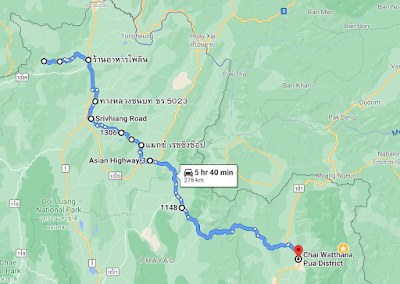