Nowadays Nan province has an airport, comfortable boutique hotels and trendy coffee shops, along with picturesque villages in the mountains, but 40 years ago Nan province was considered a wild region and sometimes even off-limited for traveling. Time has changed however and the centuries old temples built in Tai Lue architecture style with beautiful murals, green mountains and ethnic minorities are now starting to attract Thai & foreigner tourists. The main destination for visitors to Nan province is its capital Nan town and nearby surroundings. It is however not the only place of interest in Nan province. Especially those who love outdoor activities might find their way to places like Pua, Bo Klua, Chiang Klang, Thung Chang, Na Noi and Mae Charim. Upcountry Nan province offers nature, mountains and culture. From the famous Ancient Salt Pits of Bo Klua and The Yellow Ghost Tribe to Waterfalls, Coffee plantations, Markets and Rivers. If you like some help with organizing your holiday anywhere in Thailand send me an email at Chang Noi @ Traveling in Thailand. 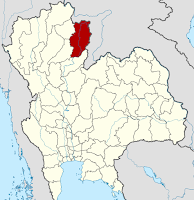 Nan province is one of Thailands most Northern provinces with neighbouring provinces Uttaradit, Phrae and Phayao. In the north & east Nan province borders to Laos, with an international border crossing at Huai Kon, serving as a gateway to Luang Prabang. The valley of the Nan River and the mountainous areas with forest, National Parks and waterfalls are the most dominant characteristics of this so far still relatively isolated Thai province. This makes it a great destination for hiking & camping, especially in the cool season. The mountains of Nan province are part of the Luang Prabang mountain range and the source for the Nan River, Wa River and Pua River.
Nan town is situated pretty central in the province, along the banks of the Nan River, famous for its Nan Longboat Races. In the part of town that generally is referred to as its Historic Center you will find among others the Wat Phumin, Nan National Museum, parts of the old city wall and traditional old wooden houses.

The weather in Nan province is as hot as everywhere in Thailand during the hot season of April and May. Then the monsoon season begins that lasts until end October with chance of heavy rains and some local flooding. From November to March the cool season hits the North of Thailand and temperatures in Nan province may go down to about 5℃ during night time (December-February). Nan province is an attractive destination all year around, but for outdoor activities it is recommended to visit during the cool season, from September to February.

There are about 500.000 people living in Nan province. Nan province is home to descendants of the former rulers of Sukhothai, Laos and Chiang Mai. But also home to the descendants of many ethnic minorities that came to live in the mountains of Nan province. Currently about 10% of the people of Nan province are ethnic minorities with a majority of them being Mien (Yao) and Hmong, but also lesser know Mlabri (Phi Tong Luang), Khamu, Thins and Tai Lue (Thai Lue) and Lua people. The remote and isolated location has without any doubts strongly contributed to the fact that traditional ways of living and many aspects of local cultures are still greatly preserved. Nearly all people now speak Thai, but besides of that also speak their own specific dialect and/or traditional language like Tai Lue or Khamu.

In the old days Nan was an independent kingdom with only a few connections to other kingdoms. The written history of Nan (Nanthaburi) goes back until the 13th century when the first kingdom was created around Pua and was associated with the kingdoms of Sukhothai and Chiang Mai. After years of occupation in 1788 the Burmese were driven out and Nan accepted to become part of what later was called Siam. In 1893 Nan was forced to give a big part of eastern Nan to French-Indochin (see the dark grey part on the map above). It was also that part where all the famous silver of Nan came from. Since 1932 Nan became a province of Thailand, although a very remote and still semi-independent province. In the 1960's to 1980's Nan province became ground for the Communist Party Thailand (CPT), hiding in the remote mountains bordering Laos. In those days Nan province was more or less off-limit for traveling. The area of currently Nan province has also always be home to many minorities from mostly China like the Hmong and Tai Lue.
The provincial seal of Nan province shows a Usuparatch bull carrying the stupa of Phrathat Chae Haeng. The buffalo goes back to a legend that the rulers of Nan and Phrae were brothers, and met at a mountain to decide about the boundary between their lands. The ruler of Nan went there on a buffalo, while the ruler of Phrae went there on a horse. 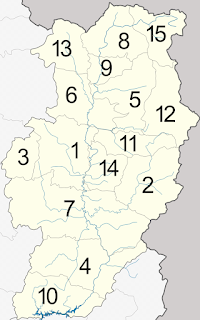 There are 15 districts in Nan province (changwat), each district (amphur) is divided in sub-districts (tambons) and each sub-district has villages (mubaans). Amphur Mueang would be normally Nan town and direct sub-urbs, but in this case amphur Mueang is much bigger as just Nan town. As a matter a fact a village 30 km north of Nan town is still within the area of amphur Mueang.
Districts of Nan province - Distance to Nan town

Places of intrest in Nan province

Distance from Nan town to places outside the Nan province :

Actually every district has a local hospital but the following are the main district hospitals :