One Night in Bangkok 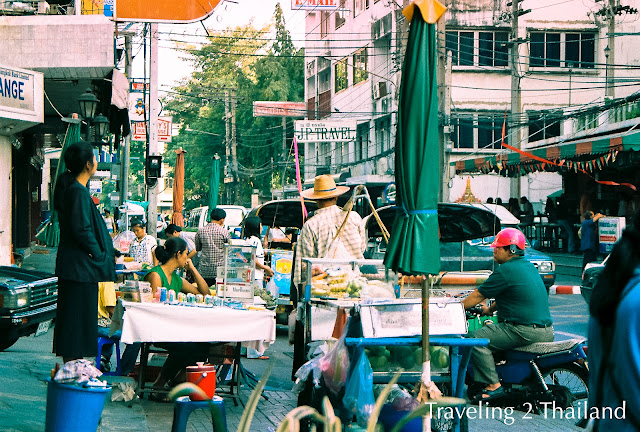 This is a fictional story based on personal experience in Bangkok. After traveling for 6 months in Southeast Asia in the 1990s I was desperate to find a way to go back and that came in an offer of a 3 months trainee job at a 5 star hotel in Thailand. This story is about how it became a few more nights as just one night in Bangkok. This story was originally published in 2011.
After a straight flight to Bangkok I took a taxi to my destination in Bangkok, a 18 room boutique hotel tucked away at a soi at almost Sukhumvit road. My first part of the trainee job was at this boutique hotel located within walking distance of Sukhumvit road in Bangkok and that is where One Night in Bangkok started. But let me first introduce another Sukhumvit road. The boulevard of lost faces, forgotten promises and ruined lives. Where broken hearts make new dreams every day just to vanish in the night and to be forgotten in the morning. At sunrise, just before reality awakens they meet each other in the lobby of just another hotel and they will offer food to the monks so all their sins will be forgiven. You pass them by at McDonalds and they will give you the happiest a smile you have ever seen. Welcome to the City of the fallen Angels.
And while working 6 days a week and 10 hours a day my way of life became like ..."It's nice to watch the game, I'm glad I control it". Well as I'm working I do have hardly time and money to play the game and ... “I would invite you but I'm afraid you would not like the rules”. About 3 months later I have to admit that I was not in control and I do not like the rules. Actually I do not understand the rules at all and I am even wondering if there are any rules.
For me it became "Another Day in Paradise" as I did not see that manipulating the truth is the Thai way of reality. And when meeting Simuang I was wondering, Is she heaven or is she hell? Or maybe bit of both? As she told me once "I do not tell you a lie, I just tell what you want to hear and you want to hear another truth". And bloody right she was this farmer girl from the endless rice fields of the Isan.
Nothing seems black or white anymore. At the barber was an older British guy with his much younger girlfriend who was dressed like she just walked out of bar (what she probably did) and of course he could see the disbelieve in my eyes .... "I am 69, in England I would be in a care-home waiting to die. Here she (looking to his girlfriend) puts a smile on my face every day. Yes it is a sweet lie, but you know what? I rather have a sweet lie from her as as the bitter truth in a care-home in England". And bloody right he was this expat from the land of Shakespeare.
Time, planning, appointments and promises, they all changed in Thailand. As a matter a fact in Thailand one does not need a watch but a calendar. And 3 months in Thailand were gone like a sick buffalo, it was time to go back to reality. Back to Europe. And while in the airplane I watched my now beloved Thailand fading away in all the little lights of the City of Angels. My travel companions in the airplane were chit-chatting about their work next week and I thought "Is there an emergency break in this airplane?"
Well there was no emergency break and I arrived in what I call my home country but it was not home anymore. A part of me was still in Bangkok and will always be. While traveling by train the typically European landscape passes by but all I see is Sukhumvit road. I did learn to forget Simuang, Wanna, Bee and all the other sweet lies. But even after more as 20 years their smile is still in my memory. Did they pickup the broken parts of life at Sukhumvit road? How are they doing?
LABELS : Bangkok Stories Thailand