on May 10, 2021
Welcome to Thailand, the Land of Smiles, one of the most beautiful & traditional but also modern countries of South East Asia. Where magic still happens and where culture dates back centuries. A country of delicious food, always smiling people, stunning beaches and a place where East meets West. Thailand has something to offer for all travelers from young to old, from group travelers to solo travelers, from families with children to singles (both women and men). Bangkok, as being an air-hub, is for many people their first encounter with South East Asia and the first place for first-time backpackers. Tourism started in Thailand from the 1960s and started to boom in the 1970's with backpackers and later with adventurous tour groups. And of course followed by less adventurous tour groups and beachgoers. If you are planning to travel in Thailand and need help with planning then send me a email at The Little Elephant in Thailand.
Read more about other destinations at DESTINATION TRAVEL GUIDES. 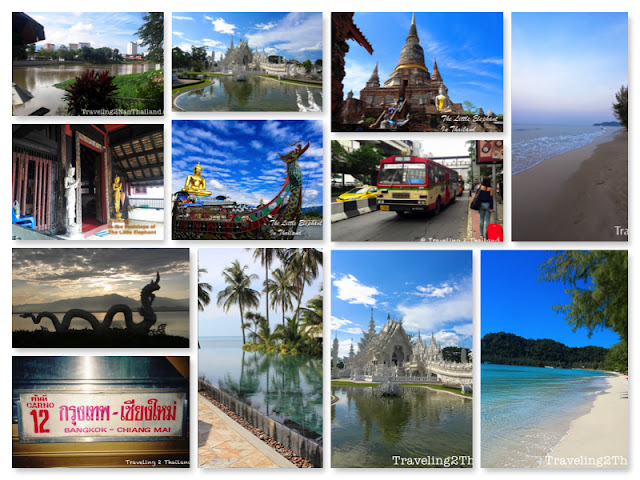 Until 1932 Thailand was known as Siam. There are about 69.000.000 people living in Thailand, the capital city is Bangkok (Krungthep) with about 12.000.000 people. The local currency is the Thai baht. And all people speak Thai, although many people speak also their own language / dialect like Isan / Lao, Northern Thai or Khmer.
Thailand has 76 provinces, plus Bangkok Administrative Area (Greater Bangkok) makes it more or less 77 provinces. Thailand can be divided in 4 regions : North Thailand, North-East (Isan), Central Thailand and South Thailand. Although there are also other sets of regions like the 6-regions system where Central Thailand is split into 3 parts : Central, Western Central and Eastern Central part. But there is also the meteorological system with 5 regions where Central Thailand is split into only 2 parts : Central and Eastern.
Thailand borders in the South to Malaysia, in the East to Cambodia & Laos, in the North to Laos and Myanmar and in the West to Myanmar. Thailand has more or less 3 different coast lines. Along the Gulf of Thailand is Southern East Coast with Hua Hin, Koh Tao, Koh Samui, Songkhla. And along the Gulf of Thailand is the Eastern Seaboard with Bang Saeng, Pattaya, Koh Samet, Koh Chang. Then along the Andaman Sea is the Southern West Coast with Krabi, Phuket, Khao Lak.

But before we start exploring Thailand, the most important thing : Travel Slow!
Not try to see all Thailand in 2 weeks because all you will see are airports, busses, hotel lobbies and taxies. When traveling slow you will meet more local culture, local people and people will start to recognise you and try to make a chat with you. In that way you will see more of the real Thai way of life.

After more as 20 years I still love & hate Bangkok and I am not a beachgoer but I love Koh Samet, Koh Kuud, Hat Chao Lao in Chantaburi and some parts of Krabi. My favourite places in North Thailand are Nan, Phrae and Mae Salong.

For Beach Life & Sun the popular destinations are
But there are many more beach destinations, both on islands as on the main land. Depending on the time of the year that you are traveling you might choose between the Souther East coast (Hua Hin and Koh Samui), the Southern West Coast (Phuket and Krabi) or the Eastern Seaboard (Koh Chang and Koh Samet). Luckily most people go to the top 10 of the beaches, that leaves the other beaches for the rest of the people. My personal favourite island is Koh Kuud.

For Culture & History the popular destinations are Bangkok itself of course and the ancient cities Ayuthaya and Sukhothai. And a bit of the beaten track Kamphaeng Phet & Si Chatchanalai. But also Kanchanaburi, Chiang Mai or Chiang Rai. And in Northeast Thailand you will find the remains of ancient Khmer temples in Phimai or Buriram. Have a look at my postings about Historical Parks.

For nature lovers the National Parks are the places to go, like Khao Yai, Doi Inthanon, Phu Luang or Doi Phu Kha with waterfalls, rivers, mountains, lakes and sometimes with wild elephants. And there are beautiful National Parks all over Thailand and even in the sea (like Koh Samet is actually part of a National Park). And in Nan province you will find mountains, rivers and waterfalls in the mountains of Doi Phu Kha for great outdoor life.

And for motorbike riders North Thailand is Motorbike Riding Heaven in the mountains around Chiang Mai, Chiang Rai and Nan. Making the famous Mae Hong Song Loop or Bo Klua Loop. Although also on your list should be Loei province, Phetchabun province and Krabi province. See also my Suggested Motorbike Routes in Thailand. And must be said not only great routes for motorbike riding but also for bicycling.

Traveling to Thailand for the first time?

Traveling for the first time in Thailand and traveling independently you will probably be shocked by the the chaos and the size of Bangkok. Yes there are about 12 million people living in Bangkok. Relax and stay at least 3 nights in Bangkok. Explorer the cultural side of Bangkok and visit the Wat Po, Wat Arun, Grand Palace, make a klong tour, go bicycling with Co van Kessel, drink a cocktail on a roof-top, try some Thai food, learn a little bit Thai and take a Thai massage. Walk in China town, make a ride with the Express Boat, make a ride with the Sky Train. Take a Tuk-Tuk.
In the early morning take a taxi to Ayuthaya and visit the beautiful old tempels, in the evening take the night train to Chiang Mai. Relax and stay at least 3 nights in Chiang Mai. Explorer the old town, have a massage, visit the Weekend Market, go to Wat Phra That Doi Suthep and enjoy the view over Chiang Mai town. Get lost in the small streets of Chiang Mai, eat northern Chiang Mai food, take a Samlor taxi.
Take the bus to Chiang Rai and visit the White Temple, make a tour to the Golden Triangle, visit the Thai-Myanmar border town Mae Sai.
Take the bus to Nan and visit the famous Wat Phumin with ancient wall paintings, explorer the historical town. Take the bus to Phrae and make a tour along the beautiful colonial teak-wooden houses, visit the market. From Phrae you could take the bus to Phitsanulok or take the day train from Den Chai to Phitsanulok or even to Bangkok. Traveling by train is a great way of experiencing local way of life.
And then end your holiday with a few days on the beach of one of the tropical islands like Koh Chang, Koh Kuud, Koh Samui or Phuket.

There are basically 3 seasons in Thailand, the Hot season (dry and  bloody hot), the Raining season (still warm but with a lot of rain) and the Cool season (dry and cool). The latter especially in North and North-East Thailand. As Thailand spans about 2.000 km from north to south you can imagine the weather is not everywhere the same at the same moment.
And of course you can travel to Thailand the all year around, the weather is hot during the hot season of March, April and May. Then from June the monsoon season begins that lasts until end October with chance of heavy rains and some local flooding. Also called the Green Season because everything is beautiful green, rice fields and the mountains.
From November to March the cool season hits the North of Thailand and temperatures may go down to about 5℃ during night time (December-February). Thailand is an attractive destination all year around, but for outdoor activities it is recommended to visit during the cool season, from November to February.
When traveling to North Thailand, in March & April be aware of the so called "burning season". During this months (and sometimes a bit longer and/or earlier) is smog haze in North Thailand due to burning of farm fields & garbage. Known area's are Chiang Mai, Lampang, Mae Hong Son, Chiang Rai and Nan. But make no mistake also the air in Bangkok or some places in North-East Thailand can be unhealthy for sensitive people. Check the air quality at World Air Quality Index.

Food & beverages goes also from cheap & simple food carts and pubs up-to stylish restaurants on a roof-top. And you can basically eat any kind of food from Western food like Italian, British, German to Asian like Japanes, Korean, Chinese, Indonesian, Cambodian and of course Thai. Although the stylish restaurants and non-Thai food is limited to popular destinations like Bangkok, Chiang Mai, Koh Samui, Phuket, Pattaya, Hua Hin and other beach destinations. But also available in modern cities like Khon Kaen, Udon Thani, Chiang Rai and Khorat. For restaurants, coffee shops and some pubs see my Comprehensive F&B Reviews. For Thai food in general see my postings about Thai Food.

Getting to Thailand is easy as Suvarnabhumi Airport & Don Muang Airport in Bangkok are a major air hub and you can fly from almost all major cities in the world to Bangkok. Airline companies that fly international to Bangkok include KLM, Eva Air, Korean Air, Air Asia, Oman Air, Emirates, Qartar Airways, Turkish Airlines, Aeroflot Airlines, Royal Jordanian, Fin Air, Air France, Etihad Airways, Gulf Air, Thai Airways, and many more. Besides Suvarnabhumi Airport and Don Muang Airport in Bangkok there are some other International Airports in Thailand like Chiang Mai, Koh Samui, Sattahip and Phuket.

Getting around in Thailand

Getting around in Thailand is also easy

Of course "Act wisely as you would do at home", that means :
For more tips read my General Travel Advisory Thailand.

Where to go next?

But as Bangkok is a air-hub you could fly almost anywhere in the world as next destination.

Disclaimer : All information is created in good faith and is an expression of fair comment.
LABELS : Destination Guides Thailand Travel-Tips
LOCATION : Thailand