Motorbike Riding in Thailand for a loop in Na Noi 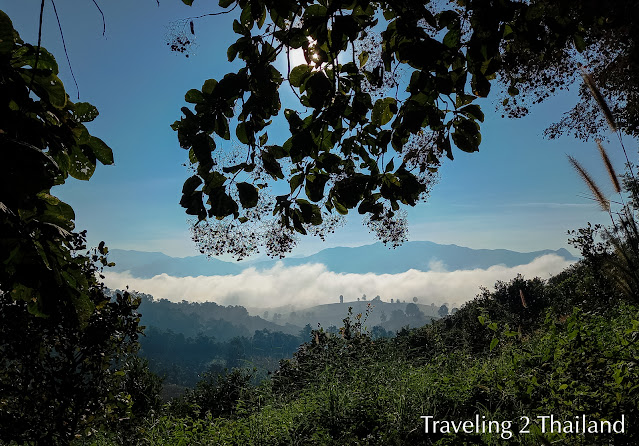 In November 2021 it was finally time again for a 2 days motorbike ride and I wanted to explore the area of Na Noi. For motorbike routes in Thailand have a look at Recommended Motorbike Routes.  If you would like to make a motorbike trip in Thailand and need information or any help, contact me via the mail-link under at my travelogue.
This is about the first day that became a 270+ km riding day from Pua to Na Noi, but with a loop around Khun Sathan National Park. It was a lovely day riding, but I was a bit tired as 270+ km in the mountains is actually a bit too much for me.
Of course I started with route 1081 and 1169 to Santisuk, all the way in the morning fog. Then route 1225 and 1168 to Mae Charin, lovely ride along the mountains. Then route 4005 and 4020 to Wiang Sa. Along the way I made a stop for small snack & drink, there is always somewhere a sala to sit and enjoy the view. This is a kind short-cut of a mostly nice twisty road. I call them the roads for the ants of CP. And with this route I had been all the way avoiding route 101 and Nan town. From Wiang Sa I took route 1026 to Na Noi and Na Muen. Wow, what a lovely twisty road is this and partly 4 lanes. I had planned to stay overnight in Na Muen at Sinn Lodge but it was still early so I continued on route 4010 and 1217 in direction of Rong Kwang and Phrae. Although route 4010 is mostly a good road there was a part where I thought I took a wrong turn. Because the road was getting narrow, shitty and at some parts steep. But then suddenly it changed again to a nice road for the ants of CP. Passing small villages and stunning views. Where route 1217 hits route 1216 I did ride route 1216 to Khun Sathan National Park and Na Noi again. And at route 1216 I was surprised. No tourists, normally there would be strawberry farms, souvenir shops, coffee shops. OK it is COVID-time, but Nan town, Pua and Bo Klua are still fully loaded with tourists. So why not the area of Khun Sathan National Park? So no lunch or coffee here and I continued to Na Noi where I went to the PTT gasoline station and bought some food at the 7-11 and did eat it in the Amazone while drinking a hot choco.
Another thing I was surprised about this day is that I saw only 1 time big bike riders, a group of BMW rider. But normally parts of the route I did ride are popular for motorbike riding, especially in November! So after a very late lunch I did look for a hotel. After having a look at 2 very old hotels I did go to Hearn Phooriphatchai Resort with 10 teak wooden bungalows more or less in the rice fields. A bit more expensive but clean, good view, comfortable room and a nice view. In Na Noi town are a few restaurants and after a nice diner did sleep early to prepare for another day of motorbike riding the next day. This trip was part of Taking the long way home from Na Noi to Pua.
Following are a few photo's I made along the way and as last as usual a map with the route that I did ride.
Remark : Route 4010 goes from route 1026 in Na Muen (Nan province) to route 1217 (Phrae province). But This Is Thailand and also in Phayao province is a route 4010! Update : It seems that de provinces can have their own road numbers and this route actually also has another number. 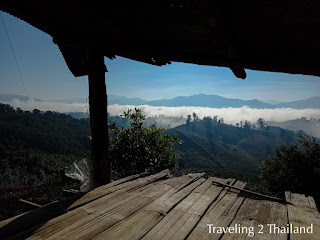