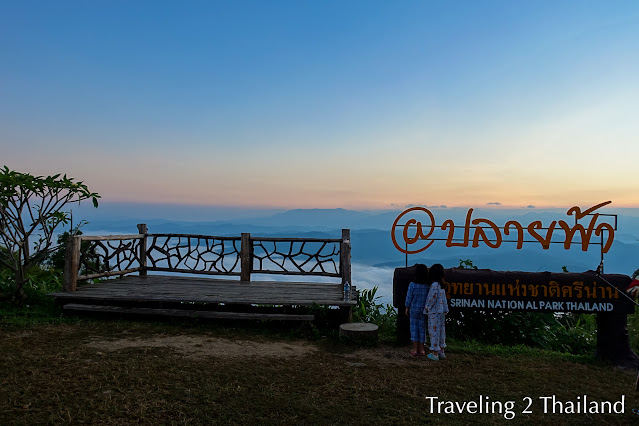 In November 2021 I made a 2 days trip from Pua to Na Noi and of course back home in Pua. For motorbike routes in Thailand have a look at Recommended Motorbike Routes.  If you would like to make a motorbike trip in Thailand and need information or any help, contact me via the mail-link under at my travelogue.
I did stay overnight in Na Noi and left in the very early morning when it was just getting a little bit light. I first took route 1083 to Doi Sammer Dao where I enjoyed the view at 800m high. I did actually not go to Doi Sammer Dao but to the viewpoint along route 1081. Amazing, what was once just a check-point with nice view is now a camping ground with coffee shop and toilets. There were people but not very busy. And the parking for going to Doi Sammer Dao was empty. A bit after the main viewpoint is a second viewpoint where I was alone and enjoyed a snack & drink that I bought in the 7-11 in Na Noi. I love to sit and relax here. After that it was time to my mission to test the missing link between route 1083 and 1243. So I continued route 1081 that after about 10 km is crossing the Nan River in a small valley. I parked my motorbike on the bridge and enjoyed the view and did eat another snack sitting on the bridge. All alone in the clouds and nature (more or less). A bit after the bridge there is small dirt road to the right, to Kaeng Luang. Here comes a small river (that I would see later again) in the Nan River and there is a kind rapid of huge rocks in the Nan River. I continued route 1083 again for about 5 km and just before a check-point there is a small road to the left. Well that is the beginning of the Missing Link between route 1083 and route 1243 that would bring me to Mae Charim. To make a longer story short (read de link) the missing links stays a missing link for me due to a collapsed bridge. So I made u-turn and did ride back to route 1083 and back to Na Noi. A shame because I was actually 6 km from route 1243! This morning side trip to the viewpoint and trying the missing link was an extra of about 90 km! So back and passing Kaeng Luang, the bridge over the Nan River and the viewpoint at Sri Nan National Park and finally passing Na Noi again.
And again taking route 1026 in direction of Wiang Sa, but I took a sightseeing route and took route 3014 that connects route 1026 and route 101. Then a bit of a blast on the brand new 4 lanes route 101 to Wiang Sa and Nan town. Driving thru Nan town and taking route 1169 to Ban Kiw Muang and Santisuk. Just before Ban Kiw Muang (famous for its few and coffee shops) I stopped at a small local coffee shop for a drink. After that it was route 1169 and route 1081 back to Pua. From Na Noi to Pua was another 125 km riding the lovely roads of Nan province and I still love it! This trip was part of Riding around Khun Sathan National Park.
Following are some photo's I made along the way and as last as usual een map of the route I did ride. 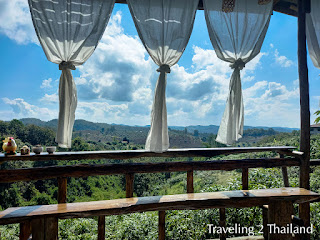