On the motorbike to my viewpoint along route 1148 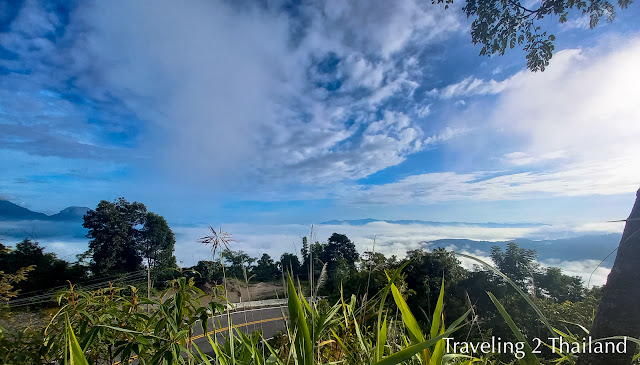 In November 2021 I made a motorbike trip from Pua to Phu Lankha. For motorbike routes in Thailand have a look at Recommended Motorbike Routes. If you would like to make a motorbike trip in Thailand and need information or any help, contact me via the mail-link under at my travelogue.
Photo above was made at a viewpoint long Route 1148 in Nan province, North Thailand. The cool season of 2021 is beginning although in the afternoon it is still bloody hot. So I left early in the morning at 5:45am for a half day motorbike trip to my favourite viewpoint along route 1148. I just love to sit there, watch the mountains and have breakfast. Unfortunately  some tourist did disturb me, but after 5 min they buggered off after they realized that parking their car on a mountain road and in a curve is not a smart idea. In total it became a 150 km ride, first route 101 from Pua in direction of Tha Wang Pha, then a short-cut between route 101 and route 1148. And if it would not have been so foggy there would have been great view along this short-cut. Then route 1148 to Song Kwae, all the way in the clouds. So I needed a hot choco and the 7-11 in Song Kwae is serving that at 6:30 in the morning. And although it was already cool outside the air-con from 7-11's are always on full blast, so the girl behind the counter had a big warm blanket over her 7-11 uniform. After Song Kwae route 1148 becomes a roller coaster of curves and mountains. And once you get a bit higher you are above the clouds and have stunning views over a sea of clouds (Talay Mok). I stopped at the first Viewpoint. There is a sign for it but no maintenance at the viewpoint and actually not real parking. You have to walk up about 50m at an overgrown jungle path (actually steps). What a pity that  nobody sees the potential of this viewpoint. After a photo shoot I did ride 2 km further where is another great place to sit and watch the mountains and clouds. This is not an official viewpoint, so no parking and no walking path. Actually most of the area was overgrown by jungle. But more and more people start to make a stop here. I enjoyed my breakfast and the stunning view. After breakfast I did ride another few km to see the valley of Phu Lankha.... not clouds or fog at that side of the mountains. So I made a u-turn and did ride back. But at Ban Phu Lak I tried the find the the short-cut from Ban Pha Lak to route 1279. But Google is wrong, it is just a dirt track. So back to route 1148 and Song Kwae, from where I took route 1097 to Chiang Klang and then route 101 back to Pua. Route 1097 as short-cut between route 101 and route 1148 is stunning for curves and scenery!