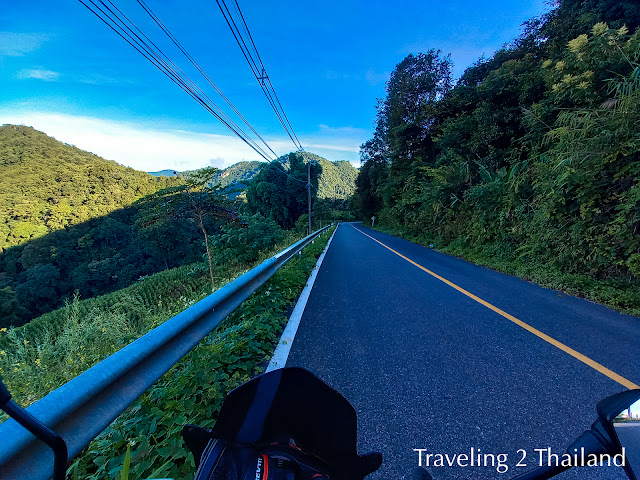 Route 1256 in Nan province North Thailand, as a first in a serie about some special roads in Thailand. Route 1256 is 45 km and begins at the intersection with route 1081 in Pua and ends in Bo Klua at again the intersection with route 1081. At the beginning of this road you are almost at it lowest point at about 250m above sea-level and at Viewpoint Doi Phu Kha you are at the highest point at 1.715m above sea-level. Yes Route 1256 is a road full of curves & mountains. But you will also be passing some points of interest. Keep following and let's find out! Photo's and text continue under the screen-shot of route 1256 on Google Maps.
Starting at the intersection with Route 1081 and if you are interested in temples then after about 300m is the first Point Of Interest (1) on your left with the Wat Phrathat Beng Sakat and a replica of the Old City Wall of Pua. From here you have a nice view over the valley of Pua. Continuing on Route 1256 you will ride thru the village Ban Suan Dok and crossing a small river before you will be riding thru Ban Rong Ngae.
In the middle of Ban Rong Ngae is the next POI (2), behind a small soi on you left side is the beautiful temple Wat Rong Ngae, said to be oldest temple of Nan province. Although the building itself is almost brand new, it is build in traditional style made with wood. If you are interested in temples then this POI is highly recommended.

Continuing over Route 1256 you will be passing the villages Ban Don Kaeo and Ban Mon before you are crossing the Yo River. After the bridge you will start to go into the mountains. And a bit later you will be passing the village Ban Na Lae where you will be crossing the Yo River again where it comes out of the jungle as a small but wild river. A bit after the village is on your left hand side a coffee shop & restaurant.
After 14 km on Route 1256 is POI (3) on you right hand side and a bit higher as the road is a local shrine to hounour Grandfather Khun Noon - Khun Fong. No fancy building but just a wooden shrine between te trees. Be aware there is no parking and you will have to climb/walk up. About 100m before there is a small parking option. Sorry no photo.
Continuing about 6 km on Route 1256 is the next POI (4), a scenic point, called the Floating Road. The road is on the ridge of the mountains and first goes down and then steep up. When there are clouds left & right it is like the road is floating on the clouds.
Continuing about 2 km on Route 1256 is the next POI (5), on your right hand is the "Somdej Phra Maha Munee Siphukha Pagoda". The pagoda itself is not so impressive but from behind the pagoda you have a nice view over the valley of Pua. And at the parking place are also toilets.