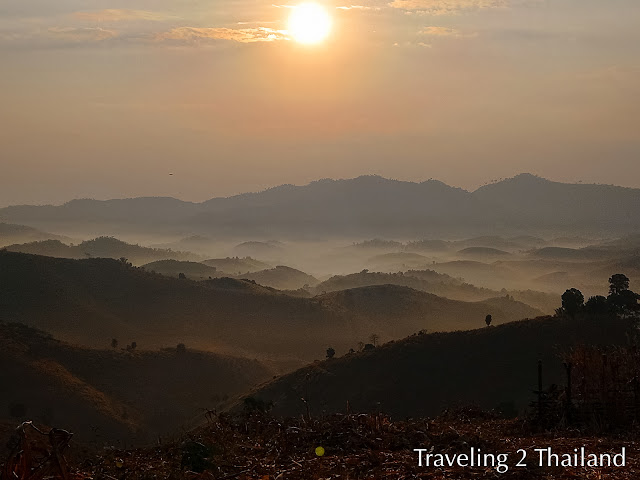 In early morning of Christmas 2021 I was making a motorbike trip from Chiang Muan to Nan and was passing the market along route 1091 near Ban Pang Poei. And behind the market is a great viewpoint from where I had a beautiful view over the misty mountains of Ban Luang. And in this way with the fog you do not see that all mountains are shaved (all trees cut down) for the production of corn.
It is a bit a pity that the market is not taken care of. Originally some villagers from Ban Pang Poei were selling jungle food along route 1091 at the road going to Ban Pang Poei. But that was not safe as cars would stop in the road. So the government created a market about 1 km before that point. There is parking space, toilets and 2 row's of covered market stalls. But no maintenance so part of the parking place is jungle and only a few people are still selling jungle food. Then the viewpoint behind the market is actually closed with bamboo sticks and also partly overgrown. What a missed opportunities!
LABELS : Nan Province North-Thailand Route 1091 Sunsets-And-Sunrises Thailand Traveling Viewpoint
LOCATION : VHC5+9V8, Sanian, Mueang Nan District, Nan 55000, Thailand