On the motorbike to Ban Muang Phrae in Loei 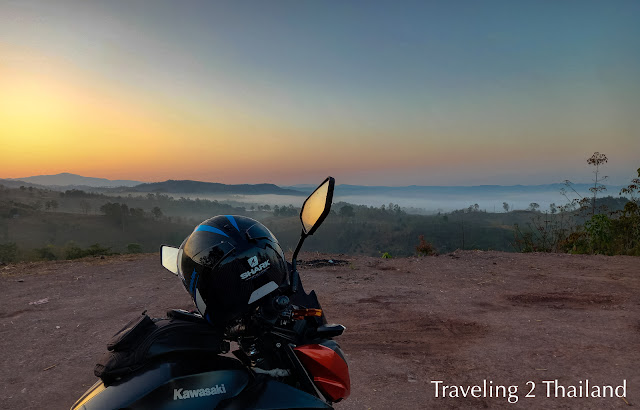 In January 2022 I made a motorbike trip from Pua in Nan province to Ban Muang Phrae in Loei province, following the Thai-Lao border and taking all the mountain back-roads. A total of 315 km following route 1081 & route 1169 to Santisuk, route 1225 to Mae Charim, route 1243 to Bo Bia and route 1268 to Ban Muang Phrae. For the full route have a look at Route at Google Maps. Route 1243 is at some parts a bit shitty and at route 1225 is some road construction. For motorbike routes in Thailand have a look at Recommended Motorbike Routes.  If you would like to make a guided or self-guided motorbike /scooter trip in North Thailand and need some help then send me a email at : Contact @ Traveling 2 Thailand
Ban Muang Phrae in Na Heao district in Loei province is located right along the Thai-Lao border what is following the Hueang River. This little village thanks its existence to the place to cross the river to Laos. So it is a locale border crossing and on the other side in Laos is the village Muang Pheir. But the Thai & Lao are living like it is one village. I came to Ban Muang Phrae for the first time in 2015, when it was still an insignificant village and it is actually still an insignificant village but now with a few hotels, a 7-11 and a few Coffee Shops and Thai tourist start to come here. Within Na Heao district are actually a nice things to see & visit like Phu Suan Sai National Park (be aware double pricing), a few viewpoints and a few beautiful old temples.
It was a great ride along the Thai-Lao border and I made my first at the 7-11 in Mae Charim for a drink & snack as I did know this would be the last civilisation for the news 100 km. So I also filled up the gasoline tank here. Route 1243 goes thru a kind of forest area where is a beautiful viewpoint Shong Paen Din but for some reason it was closed (can not go up). Route 1243 is also passing Bo Bia, what is a weird area as both Thailand and Laos claim it is theirs. So now there is an area that is both Thailand and Laos but also both not Thailand and not Laos. Needless to say I was not allowed to enter this area. Route 1267 is passing Namtok Phu Soi Dao, Phu Soi Dao National Park and Phu Suan Sai National Park. For visiting you will have to pay entrance fee, for Thai this is 20 baht and for foreigners this is 100 baht. Pink cards or driver licenses are not accepted so I did thank them for their good intentions and told them I am sure Lord Bhuda will reward them in their next life.
So I did stay at Kob Phochana Resort, what is a big name for a very simple accommodation but almost brand new rooms for only 500 baht. Actually right in the village is also a brand new hotel but there was nobody to sell me a room.
In the afternoon I did ride around the area of Ban Muang Phrae and saw a viewpoint, but how to get there? No roads to be seen on Google Maps. But when riding in that direction I saw a sign to a small road that should be going there .... it is about here but not exactly. And the road that Google Maps shows there is not there in reality. But it was a bit scary road as it was so steep you could not see if there would still be a road in 10m. Making a u-turn was no option anymore. Also hoping that somewhere would be a place to make a u-turn. Anyway my reward was a stunning view over the valley of Na Heao! Perfect place for sunset. About 300m before the viewpoint there are some people who did make a camping site and even a kind of bungalow as accommodation. So much hidden gems in Thailand!
The next morning I did wake up early and after a hot choco at the 7-11 I made a short ride over route 2195 to viewpoint Phu Pha Nong from where you could walk up to Phu Pha Hmok but in the early foggy morning and with motorbike boots I was not in the mood for walking a steep 1.200m in the forest. But even the starting point is a great location for sunrise thru the fog.
Route 2195 was until there and a bit further a beautiful brand new road, in comparison with in 2015 when it was a kind of road you was not sure if it was actually a road. With more put-holes as road. Times are changing, even in Na Heao! Following are some photo's I took along the way and last but not least a map of the route I did ride.