Motorbike Riding in Thailand from Pua to Ban Santisuk 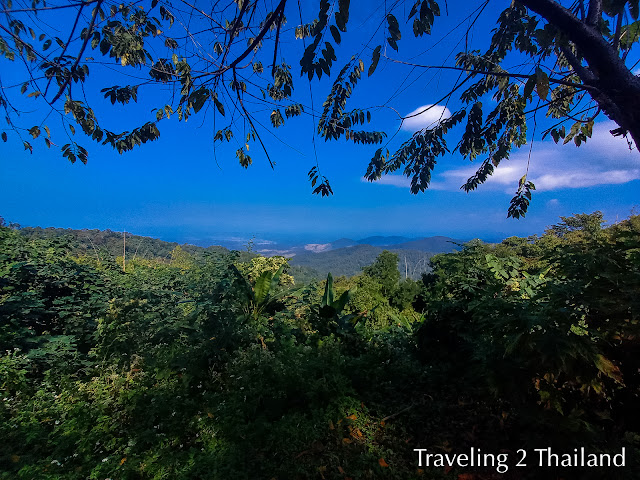 In December 2021 I made a motorbike trip to Ban Santisuk on the border of Nan province and Phayao province. For motorbike routes in Thailand have a look at Recommended Motorbike Routes. If you would like to make a guided or self-guided motorbike /scooter trip in North Thailand and need some help then send me a email at : Contact @ Traveling 2 Thailand.
Ban Santisuk is a small village in a valley between the mountains and used to be a communist stronghold in the 1960's and 1970s. And once you visit this area you understand why. As usual I took first route 101 to Chiang Klang and then route 1097 to Ban Song Kwae. And along route 1097 I always make a stop to enjoy the morning view over the valley of Pua. From Ban Song Kwae I took route 1148 to Phu Lankha. A bit after Phu Lankha there is a road to the left to Pong, this is route 1188. A beautiful road thru forest and passing some small villages. From route 1188 I took an unnamed road in direction of Ban Khun Kamlang. Continuing this road you will be passing Doi Pha Chang Wildlife Sanctuary and the road ends at Ban Santisuk. It is a sometimes small & steep road at a max. hight of 1.123m above sea-level. Ban Santisuk is a small village in small valley fully surrounded by high mountains. The road I took is the only way in or out. Hence making it in the 1960s and 1970s the perfect place for a communist stronghold. My plan was to go to a Communist Memorial just out of the village. But the road to it was a dirt road and with a river crossing of about 50cm deep. Not for my Z250 but for off road riding this must be a great area. So after looking around in the village I did ride back again to Pong. A few km before Pong is a small village where was to my surprise a great place for coffee and snack. A Shell Gasoline station that in the same way as PTT Gasoline stations had a nice coffee shop from Chao Doi, a restaurant and a 5 star toilet. I am always wondering why other gasoline stations are not copying the business model of PTT. In Pong town I had another lunch snack and I made a sight seeing ride to Chiang Muan, what is only about 40 km. Chiang Muang is also an insignificantly small town was it not for the economic contribution of the open-pit coal mine about 5 km from Chiang Muan. Mind you an open wound in the mountains of 300m wide and 1 km long. But in Chiang Muan are some restaurants, 7-11, PTT-gasoline station and a few hotels. The latter actually more as I thought, so I stayed at Deetorjai Resort just out of town. The next day I did wake-up early again and had first a hot choco at the 7-11 before I headed to Nan town via route 1091 passing Ban Luang. It was a beautiful but cold and sometimes foggy ride in the sunrise & mountains. I love it! Along the way I made 2 stops at viewpoints. Following are some photo's I made along the way, click on the photo's to enlarge.
BTW when riding back via route 1091 I was passing again a village called Ban Song Kwae! Yes there are in Nan province 2 villages with the same name (but in different districts).