On the motorbike to Ban Sawang 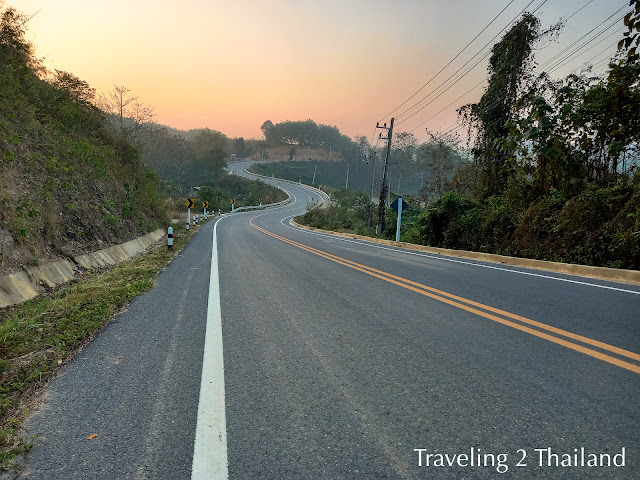 End February 2022 as being one of the last days of the cool season with still a cool morning it was time for a ride to Ban Sawang in Mae Charim district. So I left a bit before 6:00am when it was still more or less dark and cool with 15℃. Actually once riding it was cold! And near Santisuk it was still very foggy. From Pua I first took route 1083 & 1169 to Santisuk and then route 1225 & 1168 to Mae Charim where I had a hot choco and a snack at the 7-11. A bit after Mae Charim route 1168 goes to the left to Ban Nam Phang where you will be crossing the Wa River. A bit after Ban Nam Phang there is an intersection with route 1259 to the right to Ban Rom Klao .... and I could not resist and make a 25 km go and 24 km back detour to Ban Rom Klao. Photo above is along route 1225 from Santisuk to Mae Charim.
After that I followed route 1168 again to Ban Nam Pun and Ban Nam Tuang. And from there to Ban Sawang what is really the end of route 1168. With off-road motorbike you could probably still go further in the direction of the Thai-Lao border.
No loop to ride this time, so back it was. Then I saw that I actually not had much gasoline anymore and the next main village would be 40 km! Luckily there was a village after 25 km where they had a coin-operated gasoline-station. Good for 2 liter gasoline that would bring me back to Mae Charim. My motorbike has a 17 liter tank and that can bring me about 300 to 350 km far. So I not look too much to the gasoline but I should have done that when start riding.
Just before Mae Charim is a nice coffee shop & restaurant Tong Loung Cafe where I had a big glass of water, a hot choco and a fresh made Khao Phad (fried rice). I really love this place with nice view, friendly staff and good food! By this time it was getting hot and I was getting tired. But still had to ride 75 km back home. So I made another rest stop a bit after Santisuk where is another great coffee shop Innbox Cafe. Besides hot & cold drinks they also serve cakes and small snack food.
If you would like to make a guided or self-guided motorbike /scooter trip in North Thailand and need some help then send me a email at : Contact @ Traveling 2 Thailand