Relax along the Pua River 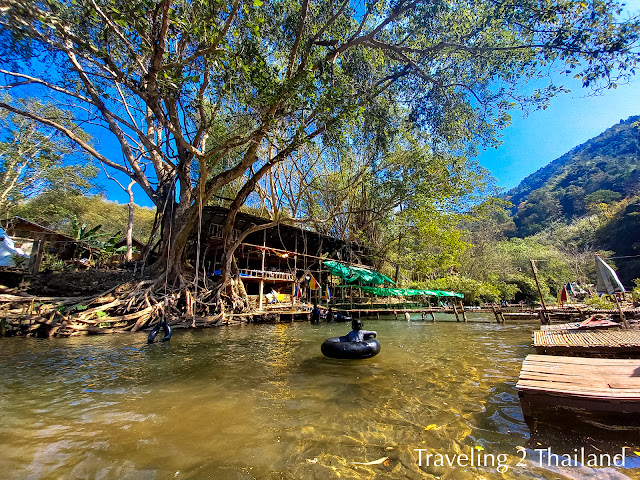 Nan province is famous for the many mountains & valleys and with that also come many rivers. And all rivers origin in the mountains, like the Pua River that begins in the mountains of Doi Phu Kha and then flows thru the valley of Pua to merge with the Nan River near Tha Wang Pha. And where the Pua River almost comes out of the mountains are a few places made to sit, eat & drink, relax and even stay overnight in a tent or very simple bungalow. Of course only in the cool season from October / November until January / February. In the raining season the river becomes twice as big and too wild. In the hot & dry season its is too hot, although with Songkran it is a popular destination to go also. See also Toob Nam Pua and Cooling down along Pua River.

There is no public transport going there. With your car or motorbike just follow route 101 from Pua for about 5 km in direction of Chiang Klang. Then take a right to Ban Na Fang what is at the end of the road. At Ban Na Fang are signs (in Thai) but basically you drive into the village at one side and out at the other side. There the road becomes a dirt road with some steep parts. Down under you will see the Pua River. Follow this dirt road until you see signs to the right. There are actually 3 places to go to.
LABELS : Nan Province North-Thailand Pua Pua River Rivers Thailand Traveling
LOCATION : จุดกางเต็นท์วังน้ำปัว Unnamed Road Tambon Sathan, Amphoe Pua, Chang Wat Nan 55120, Thailand