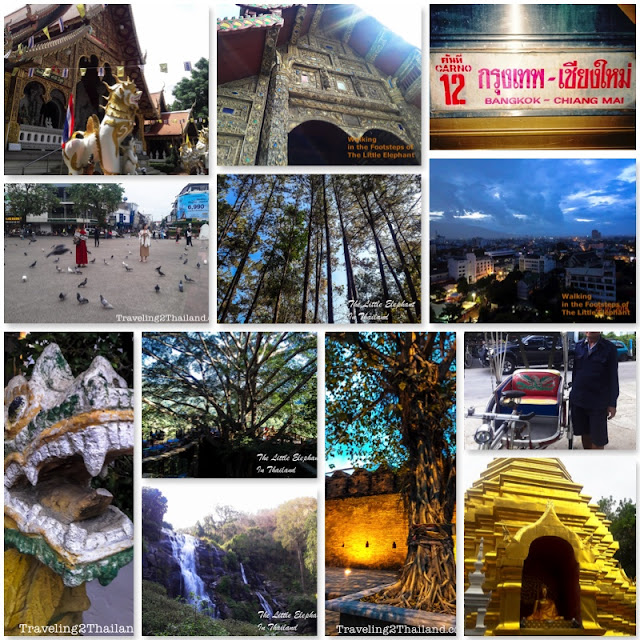 Welcome to Chiang Mai province in North Thailand, called the Rose of the North as reference to the beautiful ladies of Chiang Mai. The capital city of Chiang Mai province is of course Chiang Mai, said to be the second biggest city of Thailand. As Chiang Mai is located in the mountains of North Thailand it is always a bit cooler here and because of that Chiang Mai is a popular destination in Thailand, both for tourists and the people living in Thailand. Photo above is overlooking Chiang Mai town with the famous Doi Suthep in the background.
Read more about other destinations at DESTINATION TRAVEL GUIDES.

Chiang Mai is 700 km north of Bangkok and used to be part of the ancient Lanna Kingdom and is cultural strongly influenced by Burma / Myanman. In the west Chiang Mai borders to Mae Hong Son province and in the North to Burma. To the east Chiang Mai borders to Chiang Rai & Lampang and in the south to Lamphun.
Chiang Mai town, along the Ping River, was build in 1296 as a walled city with a moat around it. Although most of the wall has disappeared the moat and some corners of the wall are still there. This square of about 1.5 square km is nowadays called the old city (although I think the area between Thapae road and Loy Kroi road should be a part of that). The old city is a tangle of small streets (soi's) with many centuries old temples build in Lanna style. There are said to be 75 temples in the old town of Chiang Mai.
So it comes as no surprise that this part of Chiang Mai town is a popular destination for tourist, Thai & foreigners alike. It is also here where you will find most of the accommodation, markets, restaurants and tour agencies.

The highlights of Chiang Mai

When people think of Chiang Mai they mostly think about the historical center of Chiang Mai town,  the Wat Doi Suthep, the Night Bazar and going to Pai & Mae Hong Son. Although the latter 2 are actually not in Chiang Mai province.

Besides the provincial capital town of Chiang Mai, the province offers many destinations that have become popular in the past years.

When to go to Chiang Mai?

Of course you can travel to Chiang Mai the all year around, the weather is as hot as everywhere in Thailand during the hot season of April and May. Then the monsoon season begins that lasts until end October with chance of heavy rains and some local flooding. From November to March the cool season hits the North of Thailand and temperatures in Chiang Mai province may go down to about 5℃ during night time (December-February). Chiang Mai is an attractive destination all year around, but for outdoor activities it is recommended to visit during the cool season, from September to February.
When traveling to North Thailand, Chiang Mai province included, in March & April be aware of the so called "burning season". During this months (and sometimes a bit longer and/or earlier) is smog haze in North Thailand due to burning of farm fields & garbage. Known area's are Chiang Mai, Lampang, Mae Hong Son, Chiang Rai and Nan. But make no mistake also the air in Bangkok or some places in Northeast Thailand can be unhealthy for sensitive people. Check the air quality at World Air Quality Index.

Where to sleep in Chiang Mai?

In Chiang Mai town and upcountry is a good range of accommodation ranging from simple Guesthouses / Homestay's to comfortable boutique hotels & resorts. When stying in any city I always recommend to stay in the area where you want to go. For me that would mean within the old town, so between the moats or between Thapae road and Loy Kroi road. If you not want to stay in town but also not far then I recommend to stay along the Ping River. Have a look at my postings about Accommodation in Chiang Mai province.

Where to eat & drink in Chiang Mai?

In Chiang Mai town are many restaurants from simple Thai noodle shops to fine dinning and from Thai food to all kind of international food. Like good French restaurants and great pizzeria's. Have a look at my postings about Eat & Drink in Chiang Mai province.

What to do in Chiang Mai?

When thinking about Chiang Mai town most people think about the Wat Doi Suthep, the Night Bazar and the Sunday Market (actually there is another market for every day of the week). And upcountry Chiang Mai people think about Elephants and jungle. Have a look at my postings about Chiang Mai province.
In Chiang Mai you will still find the old fashioned Samlor taxi's, this are 3-wheel bicycles where 2 people can sit and they are used for local traveling. And they are a great way to see Chiang Mai town, so I would recommend to make a samlor trip. But make a price before you are leaving! Or have a look at Chiang Mai om Tree Wheels, they do tours with samlors.
The best way to explore the old center of Chiang Mai is getting lost. Yes, just walk where ever you think you want to go. Explore the small and narrow alleys of Chiang Mai.

Within Chiang Mai province you can het around with Songtheauw, Mini-van or the inter-regional busses. Chiang Mai town can be reached by :

How to get around in Chiang Mai town

In Chiang Mai town are Songtheauws for fixed routes that can also be hired for specific destinations. But make a price before starting the trip. There are also TukTuk's but again make a price before starting your trip. Some people rent a motorbike / scooter to go around in Chiang Mai town and upcountry. Be aware that scooters are legally motorbikes. But best is of course travel slow and take an Samlor.

Where to go next from Chiang Mai?