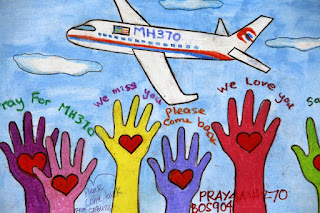 Today on 8 March 2022 it is 8 years ago that flight MH370 was "lost in thin air" while flying from Kuala Lumpur (Malaysia) to Beijing (China). Until today the airplane or any of the 227 passengers and 12 crew members have not been found. There has been many things written about the lost of MH370 and the following is my personal idea of what happend.
Have you ever seen the movie The Vanishing? If not you should do it, actually you should see the original Dutch version. It is a movie made in 1993 about someone who lost his girlfriend when she is kip-napped and killed by a weird French guy. Please stay with me, I am coming to my point. The French guy has since childhood a fixation about what kind of bad things he can do in plain sight .... and get away with it. Like he pushes his sister of the roof (she dies) when he is 6 and nobody believes he has done that. And he continues to do things like that in his life, like kip-napping the girl and killing her actually in plain sight.
I believe that one of the pilots of flight MH370 had a same kind of idea. How to steal an airplane full of people, and get away with it? I do not believe in an accident, I think everything was carefully planned. And this pilot did know the technical circumstances (lack of control of the air-space) to get away with it. In hindsight, do many pilots actually know this kind of secrets?
I believe this pilot carefully plotted a flight path & time that would make it possible to "slight" thru the radar and end up in an air-space uncontrolled. The airplane had to descent slowly, no big crash. That would create too much debris and that would have been found too easy and quick.
If he wanted to kill himself he would have just crashed the airplane in Cambodia or Vietnam. No he wanted to proof that you can steal an airplane. And what is the use of proving that if you also die? I believe the pilot intended to survive.
The airplane did probably also fly a circle on the west coast of Malaysia, I think that was done for timing, for being at the right moment at the right place. Are at certain moments some radar systems not working? Was he avoiding a flight path of another airplane? Were there other airplanes flying that needed radar silence?
Yes a crazy theory, but think about it. There are some things in the beginning of the investigation that are dismissed too easy in my opinion and some things that happend are accepted too easy. The pilot had a flight simulator at home and cleared his harddisk. How could he slight thru Thai, Malaysian and Indonesian airspace control in a time of airplanes being used for terrorism? Are really all radar information of the airspace made public? Why did it take so long before they realised they were missing an airplane?
For the passengers & crew may you rest in peace, for the beloved one's left behind may you have the strength to overcome this tragedy. And maybe someday we will find the truth.
Click on the labels to see more : Flight MH370