Love at first sight in Bangkok 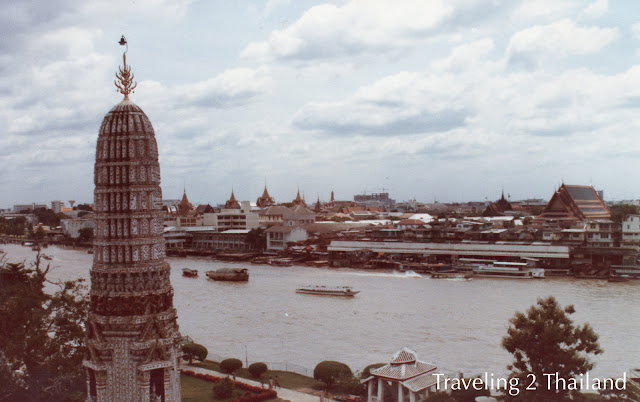 This is a fictional story based on my personal travel experience. It was summer of 1985 when I walked out of a Boeing 747 from Singapore Airlines and over the platform of Don Muang airport. I was wearing a walkman that blasted the song "One night in Bangkok" in my ears. We, a good friend of mine and me, did walk over the platform watched by young Thai soldiers with an M-16 machine-gun and Ray-Ban sunglasses. It was hot and we were slightly drunk from all the free drinks from the inboard service of those beautiful Singapore Airline girls. We were not bothered by facts like what language was spoken or what currency was used in Thailand.
An American friend would pick us up from the airport, but we arrived 2 days earlier. So we two young nitwits were standing at the chaotic arrival hall of Don Muang airport. You should know that it is actually a military airport and in that time the civilian side of the airport was very small and full of people to rip you off. Well no problem we thought, we will just call him. But we were out of luck because the telephone system was not working that day, which was in that time not a surprise. So we changed some of our cash US$ into that strange currency called the Thai baht and we found ourselves a taxi. All the taxi's had a sign "meter" but they had no meter inside. We did give the address to our taxi driver, he looked at it and started to drive and drive and drive. Until we noticed that when he looked to the address he actually held it up-side-down. Soon we did realize that he could not read it at all and surely not English. So we started to talk to him, what was also useless as he did not understand any English. But at the address was also mentioned the Malaysia Hotel and that was of course a hotel known by the most taxi drivers. So we ended up at the Malaysia Hotel in Soi Nam Dupli at Rama IV, but still not at the house of our friend. But our friend was, and still is, a respectful member of the Thai society and his name and place of resident was widely known. One of the hotel staff brought us to his house at a small compound at a Soi of Soi Nam Dupli, with about 12 small bungalows of which he occupied two. And this small compound was guarded 24-hr per day by a guard with a very beautiful white uniform that made him look like a general. But right now he was a sleeping general so we had to wake him up to open the gate for us! A ritual that would be repeated many times in the next 3 days.
Our culture shock started on the way to the house of our friend. The total traffic chaos, streets full of people and all kind of transport as Tuk-Tuk's, motorbikes, trucks, bicycle's and much more. When we arrived at the house our host was still working and not at home. We were greeted by his two maids who did know we would come. And here our culture shock continued. These two maids, who later seemed to be family members of one of his two Thai wives’s, were treating us like we were the royal family from England. We could not even touch our luggage, they ordered the taxi driver to bring it in the house and they guide us to the living room where we were pointed out to sit down on the floor. But all the time these two beautiful girls would never look us straight in the face and they would never walk in front of us but more or less behind us. And when leaving the room they would walk away backwards not pointing their backs to us. Or actually they would not walk at all but more or less sit on the floor, lower as us and then leave the room backwards with a gracious smile and wai. After a nap and a shower we had to stupid idea to take a walk and find something to eat. But all we did find was some sweet bread and cake. We returned back and we were already tired and dirty.

And I will always remember the first morning when we wanted to make our breakfast. One of the girls who saw this almost fell into a shock that we would do that ourselves. Doing that was an insult to her! She pointed us out to sit down again on the floor and they started to make our American breakfast. And they must have been very shocked what kind of strange food we brought with us, awfully smelling cheese! And this ritual of us doing stupid things would continue again when we wanted to bring our dirty dishes to the kitchen. That was wrong! We should leave this for the maids. How could we ever think of doing that!

We did not know anything about Thailand, also not that what Thailand is still famous for. But our friend, who had to work, suggest us a nice day tour to make. First he dropped us of at Klong Toey market to wander around and be shocked. I was surprised that not all Bangkokian already died of hepatitis or any other deadly diseases. Meat was sold alive or killed on the spot on a dirty floor.
After the Kong Toey market we took a taxi to the Oriental Hotel along the banks of the Mea Nam Chao Phraya. In those days the taxis were still the old Toyota's Crown and of course without meter. At the Oriental Hotel we were impressed by the gigantic luxury of this hotel. From here we took the local ferry boat over the Chao Phraya River to the Wat Arun. The local ferry boat is about 15-meters long with a big diesel engine in the middle. You have about 1-minut to get on or off the boat and then the boat leaves for the next stop. The boats are always crowded because it is a very cheap and fast transport system in Bangkok.
There we were going, between a boat full of Bangkokian and some other lost tourists. Finally they kicked us of at Wat Arun and that is good because we did not have a clue how the Wat Arun would look like. In those days you could still climb all the way up at the big chedi. But when going down you realize that it's very steep indeed. So steep that I went back backwards but I heard that some people have gone down the quick way. From the top level we had a beautiful view over the Chao Phraya and China town at the other side. From there we took a ferry to the other side to visit the Wat Po with the reclining Buddha. The Wat Po was not much visited by tourists and they just started to renovate the temple. Mostly it was still really used by worshipers who invited us to join them and to talk to us.
After our city tour we were tired and dirty. Well of course our friend told us about what Bangkok is famous for. So that evening we would go to Patpong at the corner of Thanon Rama IV with Thanon Suriwong and Thanon Silom. Soi Patpong, once a private street established by a Thai-Chinese man called Patpong. This street was originally a street where the western company's did choose to make their office. Well and there where are westerners with US$, the bars and restaurants will come along. And of course the famous, beautiful but dangerous, Thai peasant girls who started to work in the Go-Go bars that followed. By that time Patpong was not representative anymore for international company's and they moved out and their spaces were quickly filled with more bars. Patpong was fun, big fun, for two nitwits from Europe. Two young boys dressed in their disco outfit and wearing golden Porsche design sunglasses. Yes we were attractive customers, but probably that was everybody with a cash load of money. We had some drinks but we did not dive into the nightlife entertainment. I'm glad you like it, I would invite you but I'm afraid you would not like the rules. Rules? Never mind the rules as the next day it was time to leave Bangkok and fly to Singapore.
Years later I would understand that my 3 days visit to Bangkok in 1985 was love at first sight. But it would take about 10 years before I would return.
Click on the labels to see more : Bangkok Stories Thailand