on April 25, 2022
Goooooood morning Vietnam! Vietnam is a tropical country of a diverse landscape with rice paddies, stunning beaches and mountains but also bustling cities, centuries old culture, hill-tribe villages, limestone islands of Halong Bay and a French colonial history. With a lengthy coastline of 3.500 km Vietnam has a huge variety in climate and culture. Vietnam offers it all to the traveler who wants more as just a lazy day on the beach. Sadly Vietnam is by the most people know for the Vietnam War (actually the Second Indochina War) and Vietnamese boat people but Vietnam has so much more to offer as history. Follow me and I will introduce you to Vietnam.
Although the official name is Ho Chi Min City I just use the French name Saigon. If you want to travel in Vietnam and need information or any help then contact me via de email-link under at this travel blog.
Read more about other destinations at DESTINATION TRAVEL GUIDES.
Can Tho - Da Nang - Hue - Halong Bay - Hanoi - Ho Chi Min City / Saigon - Hoi An - Mui Ne / Phan Thiet - Na Trang - Ning Binh - Qui Nhon 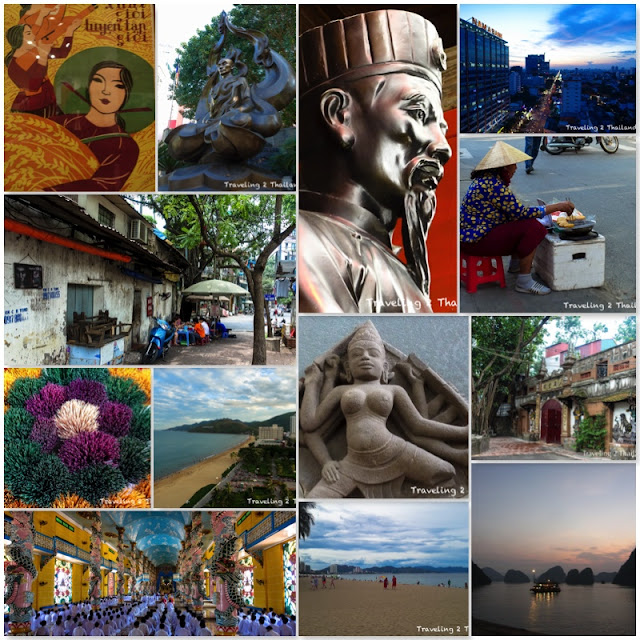 Of course you could read Wikipedia about Vietnam but let's give you a management summary. Vietnam is a so called communist country in Southeast Asia and in the north bordering with China and in the west bordering with Laos and Cambodia. Vietnam is a narrow long stretched country with a coastline of 3.500 km. Due to this geographical location there is a huge diverse climate with hot tropical in the south and cool mountains in the north.
Vietnam is famously divided as South Vietnam and North Vietnam although personally I like to divide Vietnam in North, Central and South. But cultural-wise and climate-wise you can divide Vietnam in more regions. North Vietnam can be divided in Northern Mountains and Central Coast. South Vietnam can be divided in Central Coast, Central Highlands, South East and the Mekong Delta.
Vietnam has about 96 million people so most cities have a huge population. Of course the 2 biggest cities are Hanoi in North Vietnam and Saigon in South Vietnam but also places like Da Nang, Na Trang, Hai Phong or Can Tho have a huge population of each more as 1 million people.
The area we now call Vietnam has been ruled by Chinese dynasties for centuries. During the time of European colonisation Vietnam has been first under the influence of the Portuguese, Dutch and British but Vietnam later became a French colony as part of French IndoChina (Cambodia, Laos and Vietnam).
Some handy facts :

Tourism is booming in Vietnam, both for Free Individual Travelers and for Group Tours with tourisme mostly from China, Europe and America. But before we start exploring Vietnam, the most important thing : Travel Slow!
Not try to see all Vietnam in 2 weeks because all you will see are airports, busses, hotel lobbies and taxies. When traveling slow you will meet more local culture, local people and people will start to recognise you and try to make a chat with you. In that way you will see more of the real Vietnamese way of life.
For tours & accommodation in Vietnam have a look at A Travel Mate (a Vietnamese travel agency based in Hanoi, Vietnam) or Greenwood Travel (a Dutch travel agency based in Bangkok, Thailand).

My first time traveling to Vietnam was in the late 1990s and of course I visited Hanoi and Halong Bay. End 2010s I started to travel from North to South Vietnam and I love the colonial style of Hoi An, chaos of Saigon and the river life at the Mekong Delta. And to my own shock I even feel home in Hanoi. Have a look at all my posting about Vietnam.
When traveling from north to south (or visa-versa) you will notice a difference in attitude and culture between people from South Vietnam and North Vietnam. Especially between people living in Hanoi and Saigon.

As Vietnam has a huge coastline and many tropical islands there is an abundance of beach destinations. I am not really a beach guy but I will mention a few :

For Culture & History the popular destinations are

As North Vietnam was for a long time ruled by devoted communists the nightlife of Vietnam is mostly found in cities in South Vietnam with rooftop bars in Saigon and karaoke bars in Da Nang. But Hanoi is catching up fast with beer bars and cocktail bars. And of course beach destinations like Phu Quoc and Nha Trang also have a lively nightlife. Or enjoy a sundowner at Mui Ne Beach. And even high in the mountains of places like Sapa or Da Lat you will find a rooftop bar or beer bar for a drink.

Vietnam is blessed with forests, jagged mountain ranges, limestone plateaus, crystal clear diving spots and breath taking landscapes. I could make here a list of more as 50 destinations but I will just mention the ones that I think are the best.

Lovers of the delicious Vietnamese food can go anywhere in Vietnam and enjoy the delicious food. But to taste the real thing you should go to the place of origin.

Traveling to Vietnam for the first time?

Traveling for the first time in Vietnam and traveling independently you will probably be shocked by the the chaos and the size of cities in Vietnam. Remember there are 96 million people living in Vietnam! Most people will arrive in Hanoi or Saigon. And traveling from North to South (or visa-versa) is what most people do. Remember this is a distance of 1.700 km!
Many people will fly to Hanoi and explore Hanoi for a few days. From there some people go explore the mountains in the North and/or go to Halong Bay to stay overnight at a Chinese Junk.
From Hanoi many people travel all the way along the coast to Saigon and make some stops along the way of course. You can travel this by bus, airplane or train. Or of course a combination of it. Places to visit along the way are :
After exploring Saigon for a few days many people make day-trips to the Mekong Delta, the Cu Chi Tunnels or the Holy Temple of the Cao Dai religion.

Due to Vietnam's geographical form and location there is a wide range of weather from cool weather in the north (like Sapa) and tropical hot in de south (like the Mekong Delta). So there is actually no bad time of the year to visit Vietnam but be aware of the tyfoon season from June to November.
Generally the seasons are :
Best time to visit :
But the weather is a bit more complicated in Vietnam :

Food & beverages in Vietnam goes also from cheap & simple food carts and pubs up-to stylish restaurants on a roof-top. And you can basically eat any kind of food from Western food like Italian, British, German to Asian like Japanes, Korean, Chinese, Indonesian, Cambodian and of course Vietnamese. Although the stylish restaurants and non-Vietnamese food is limited to popular destinations like Hanoi, Hoi An, Da Nang and Saigon. The good thing about the French colonisation is that you can eat French food all over Vietnam and have a nice wine. But once in Vietnam I would suggest to try the real local Vietnamese food like Pho (noodle soup), Banh Mi (Vietnamese baguette), Com Tam, Bun Bo Hue, Cao Lao, Mi Quang, Xio (sticky rice), Bahn Beo (banana dessert), Goi Cuon (salad roll) and Che (sweet dessert with fruit).

Getting around in Vietnam

Getting around in Vietnam is also easy

The most important thing when you are going on holiday is your safety. In general Vietnam is just as safe or unsafe as any country in Western Europe or other countries in Southeast Asia.
Of course "Act wisely as you would do at home", that means :
Before traveling to Vietnam check the regulations at Travel Advice US Embassy in Vietnam. And for your visa see E-Visa Vietnam and Getting a visa for Vietnam.
When traveling in Vietnam remember :

Where to go next? 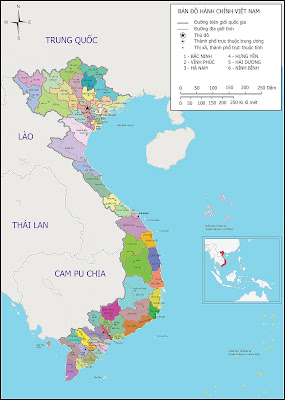 Map of Hoi An

Disclaimer : All information is created in good faith and is an expression of fair comment.
LABELS : Destination Guides Travel-Tips Vietnam
LOCATION : Vietnam