Motorbike Riding in Thailand from Chiang Khong to Phayao 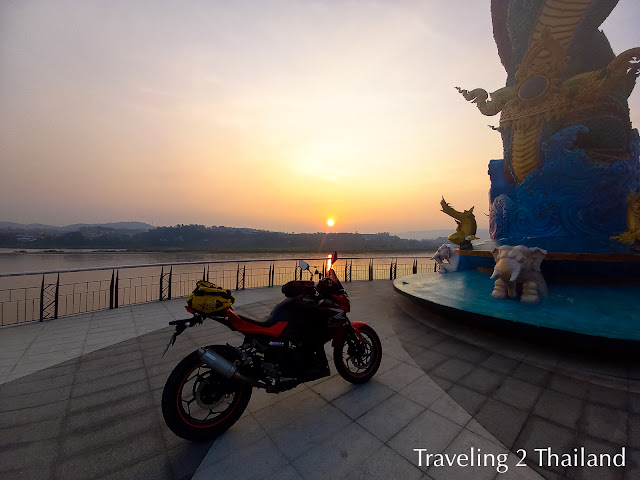 In April 2022 I was riding my Kawasaki Z250 and made a 3 days motorbike trip, this is about the second day from Chiang Khong along the mighty Mekong to Phayao along Kwan Phayao. The main trip was about 218 km but I also made a side trip to Chiang Saen what added another 25 km I think. If you are interested to make motorbike trips in Northeast or North Thailand and need some information or help, please contact me by email at The Little Elephant Traveling in Thailand.
In the early morning I first made a small ride over the new boulevard in Chiang Khong but I ended up riding to the Wat Thep Nimit, about 10 km north of Chiang Khong. From here you have a stunning view over the Mekong River, Thailand and Laos. Then I realised that I need gasoline and breakfast and I did ride back to Chiang Khong for breakfast. After breakfast I did ride back again along the Mekong River and stopped at a bit disappointing Huai Sai Man View Point. Nice idea, bad implementation and no maintenance. Down there is actually a guesthouse but no idea how to get there. By boat?
I then continued route 1290 but as said I first made a side-trip to Chiang Saen. Many many moons ago Chiang Saen was a border trading place and before that there were even what we now call ancient temples. And sometime ago Chiang Saen was on the backpack trail but then Chiang Saen seem to be forgotten by everybody. But it looks like live is coming back to Chiang Saen and the boulevard along the Mekong River still breaths the vibes of the glory days of travellers and trading. I love little towns like this! Yes Chiang Saen was the worth the extra km's riding, it is a lovely town along the Mekong River and I enjoyed a delicious hot choco and fresh home-made croissant at Bake Time Coffee.
After my hot choco I did ride to Phayao the long way via so called short-cuts as I wanted to avoid going thru Chiang Rai and riding route 1. But going thru small villages without signs costs a bit time while looking at Google Maps. By this time it was getting hot so I had a few stops along the way to drink & rest.
I arrived in the afternoon in Phayao and it was very quiet on the streets and restaurants. Actually almost deserted. And it was bloody hot! So after checking a few hotels I was happy to be at Baan Ma Good Hotel, to take a shower and a rest.
Photo above was made in in the early morning in Chiang Khong at the new boulevard along the Mekong River with in the background the sunrise over Laos. Following are more photos I took while motorbike riding from Chiang Khong to Phayao.