The burning season at the mountains of Doi Phu Kha 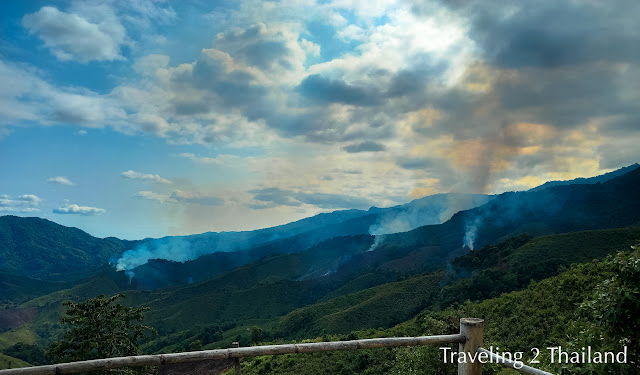 In April 2022 I was riding from Bo Klua to Pua via route 1256 and first I saw big dark rain clouds but coming closer I saw that that it was actually smoke from burning the mountains. And mind you this were not accidentally fires. Local people were in full control of it. It was not an area that was a forest but an area that long time ago was a forest and is now used for farming. Mostly here is grown corn for the one and only biggest food company of Thailand. And so every year the forest of the mountains of Doi Phu Kha in North Thailand is eaten away (destroyed) another few meters. Nobody notices but in a few years all trees will be gone and people will complain about landslides and flooding. Maybe someone could inform the farmers that mountains for tourists bring in more money as corn?
As of writing this on 7 April 2022 the AQI is 199 (Unhealthy) for Nan province and even worse in Huai Kon with an AQI of 278 (Very Unhealthy).
Click on the labels to see more : AQI Doi Phu Kha Nan Province North-Thailand Thailand Traveling