Some old photos from Vientiane, Laos 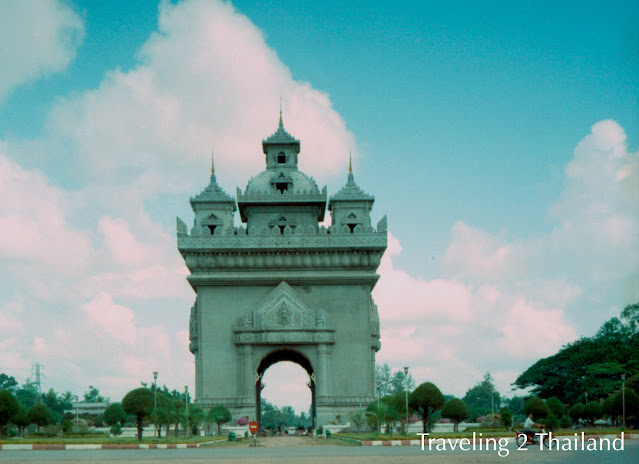 In 1997 we did travel to Laos and of course did stay in Vientiane, what in those days was still a dusty big village along the Mekong River. With roads of sand and old Russian buildings. Now looking back on it I am happy I had the opportunity to travel to Laos in those days. But people traveling now to Laos will say that also 25 years later.
Vientiane is the new capital city of Laos, until the Lao Revolution the royal capital city of Laos was Luang Prabang. Photo above is the Laos Arc de Triumph or Patuxai in Vientiane. Also nicknamed the most ugly building of Vientiane, made from cement that was supposed to be used to build an airport. The roads around it where a kind of dusty sand roads and traffic and people walking would just go anywhere they liked. Photo under is the view from the Laos Arc de Triumph but I think that was in 1998.
The following 3 photos are the road along the Mekong River in Vientiane. The road was a dirt road and an earth wall with trees was there to protect Vientiane from flooding by Mekong River. And on that earth wall were in the evening small "pubs" where you could sit and drink Mekong whisky or other home made alcoholic drinks. And of course something to eat. This places did become very popular with backpack tourists and a signage of Vientiane. But this all is gone, actually I can not imagine now that it was ever there. Now new land has been made where the Mekong River was and the earth wall has become a real dyke. Progress has been made and for the people living in Vientiane it is much better now.

Photo below is the famous Inter Hotel, it is still there but now called a boutique hotel. Next to the hotel was a travel agency and around the corner were some restaurants. The place to stay for backpackers in 1997. The hotel was famous for the disco under the hotel, the sound of the bass would keep you awake at  night and early morning. The rooms were very basic and full of dust from the roads of Vientiane. Our room had warm water, made by a huge ugly Russian boiler that looked like it could explode any moment.
Following 3 photos were made at the in those days new International Airport of Vientiane (VTE) in 1997. In 1999 the airport became official Wattay International Airport with a new extended building. And the old building was then used as domestic airport. In 2005 the airport upgraded and extended again. In 2018 a larger domestic terminal was constructed and connected to the international terminal. And in the all process the old building has been totally destroyed.