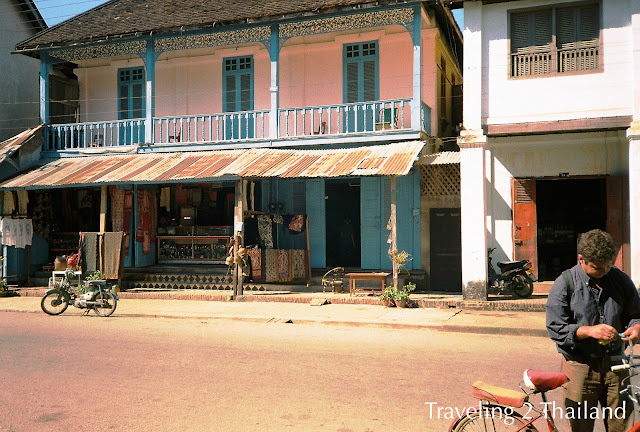 In 1997 we did travel in Laos and besides in Vientiane we did stay in the former royal capital city Luang Prabang in North Laos. In those days Luang Prabang was already a popular destination but it was also still a village with a French colonial touch. The chickens would still be walking over the streets, no scooters, almost no cars and many guesthouses for backpackers in the old quarter. But things have changed! Now looking back on it I am happy I had the opportunity to travel to Laos in those days. But people traveling now to Laos will say that also 25 years later.
Luang Prabang has changed a lot, it became much bigger. But also the old quarter changed into something that probably has never been there. Nice colonial style streets with side walks and street lights. Exactly like tourist think it was 100 years ago. Photo above was taken I tink on the main street in the old quarter, Sakkaline road. In those days already the street with souvenir shops, restaurants and a few guesthouses. I think left on the photo is a Honda C70 scooter, now an old-timer.
The 2 photos below are I think made at the other main street in the old quarter, Kounxoau road. As you see farmer village life was right in the middle of Luang Prabang. At the first photo people are drying a kind of cookies in the sun.

The following 2 photo were I think made at the market at Sisavangvong road behind the Phousi Hill.

The last photo under was made at an old temple building near Saynamkhan River View Hotel. It is probably part of the Wat Siphoutthabath. In those days this building was closed and used as storage for Buddha images. Mind you Laos is a communist country and communists do not favor religion.
LABELS : Laos Luang-Prabang Old-Photos Traveling